Meeting of MFAs and Parliamentarians of CAS: to Be Proactive to Mitigate Climate Hazards 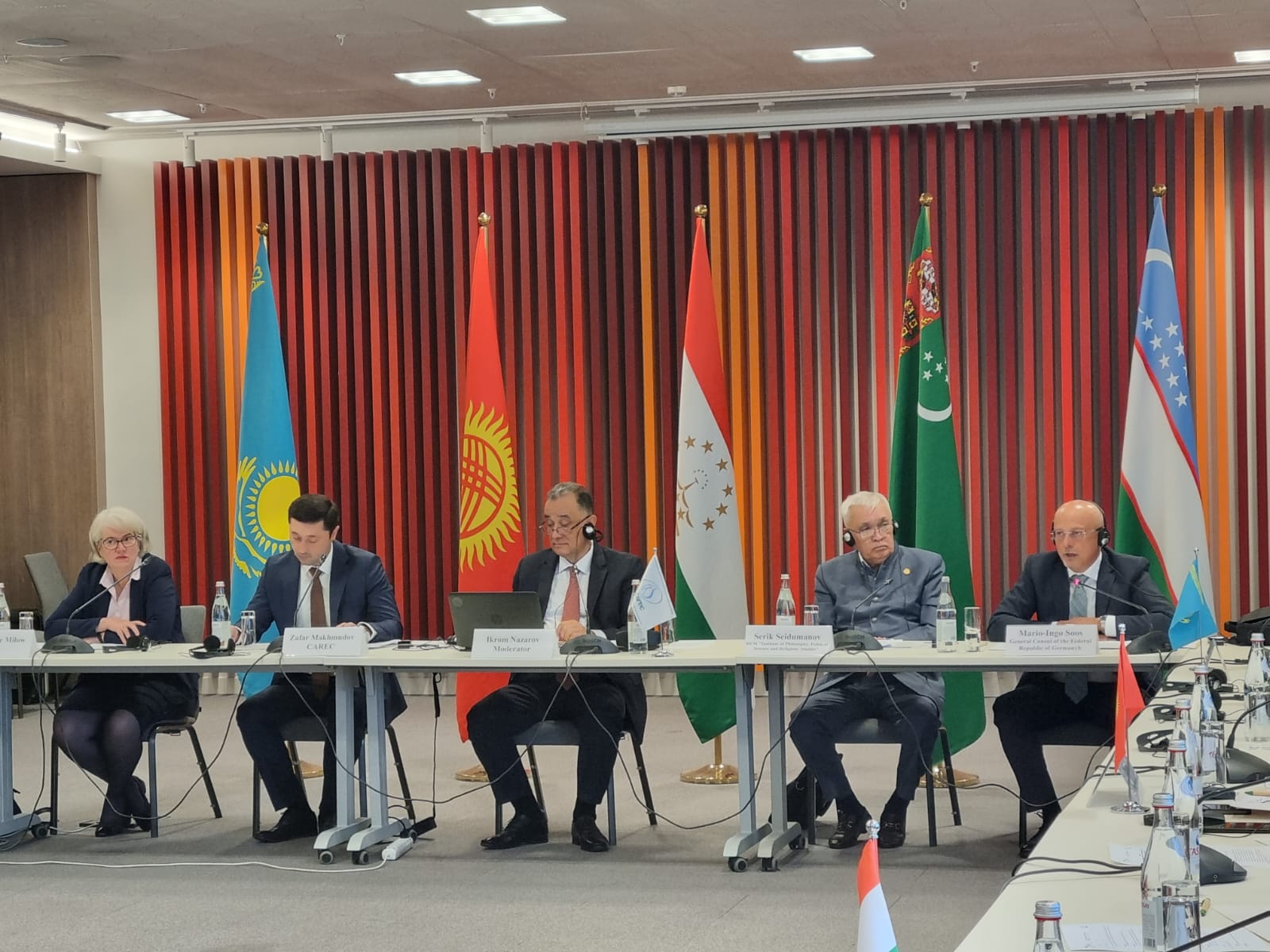 September 20 – Central Asia – Almaty – The Seventh Meeting of Representatives of Ministries of Foreign Affairs and Members of Parliaments focused on improving legislation and developing climate policy in Central Asian countries.

In the welcome speech, Ambassador of the European Union to Kazakhstan Kestutis Jankauskas stressed the importance of partnership with the countries of Central Asia for the European Union in addressing common environmental issues.

In his turn, General Consul of Germany in Almaty city Mario-Ingo Soos highlighted importance of the regional cooperation to mitigate and adapt to adverse effects of climate change.

The Executive Director of the Regional Environmental Centre for Central Asia (CAREC) Zafar Makhmudov said, “CAREC responds in timely fashion to the contemporary environmental challenges but our ambitious goal is to be proactive to minimize possible climate hazards.”

At the meeting, the participants highlighted the relevance of regional climate policy and the need for coordinated action among the countries of Central Asia due to the rapid melting of glaciers, the length of dry periods, and the negative impact of climate change on many sectors of the economy and the lives of local people. In particular, the intensity of climate change in the region is twice the world average, partly due to the drying up of the Aral Sea and the dependence of the region’s river flows on mountain glaciers. Responding to climate challenges in Central Asia, representatives of the Ministry of Foreign Affairs and parliamentarians discussed progress in improving legislation on climate change adaptation and mitigation, as well as achievements in climate commitments in each country of Central Asia.

The parliamentarians of the Central Asian countries outlined the main points of mitigation and adaptation actions.

The Deputy of Mazhilis of Parliament of the Republic of Kazakhstan Aizhan Skakova reported on the recent ratification of the Law on Establishment of the Global Green Growth Institute which will boost the growth of the new green low-carbon economy model and allow international expertise.

The Deputy of Jogorku Kenesh of the Kyrgyz Republik Alisher Erbayev said the country developed the program to mobilize investment resources for climate change adaptation in the key sectors of the economy. It was also suggested to devote the next meeting to issues of water management in transboundary rivers and groundwater basins of the region in the context of climate change

The Deputy of Majlisi Oli of the Republic of Tajikistan Azizoda Gairat raised the problem of intensive melting of glaciers and stressed the importance of water conservation. According to him, more than a thousand of Tajikistan’s 14,000 glaciers have disappeared in the last 30 years. The country is currently taking significant measures to meet and adapt to climate change

The Deputy of Mejlis Milli Gengesh of Turkmenistan Merdan Babakulov said that Turkmenistan intends to achieve zero greenhouse gas emissions by 2030. He noted that the country is reducing greenhouse gas emissions, despite the high rate of economic development through the introduction of modern production technologies in electricity and industry, as well as through extensive

Chairman of Aral Sea Region Development Committee of the Senate of the Oliy Majlis of the Republic of Uzbekistan Bory Alikhanov noted that the recent SCO Samarkand summit also outlined joint actions to combat climate change. According to him, Uzbekistan is actively developing practical solutions for adaptation and mitigation. The Republic of Uzbekistan is actively investing in renewable energy sources (RES), plans to increase the share of renewable energy to 25 per cent, and develops hydrogen energy technologies.  Special attention is paid to the Aral Sea region where large-scale and unparalleled work is being carried out. Under Presidential Decree 4849, Karakalpakstan has more than 2,700 projects worth 21 trillion 200 billion sum and 1 billion US dollars for 2020 - 2023.

Participants discussed the strengthening of regional cooperation following the results of the Fourth Consultative Meeting of the Central Asian heads of states in Cholpon-Ata.

They also considered the draft of the regional statement of the countries of Central Asia to inform the world community about the region’s efforts to implement the Paris Agreement and preparations for the forthcoming 27th Conference of the Parties of UNFCCC (COP-27) in Sharm el Sheikh, Egypt.

The presentation of the Regional Statement at COP-27 will draw the attention of the world community to the high vulnerability of the region and the readiness of the Central Asian countries to strengthen international cooperation, and adaptation and mitigation measures taken by countries in the region.

Let us recall that CAREC initiated the preparation of the first regional statement of the Central Asian countries at COP-26 in Glasgow. Moreover, CAREC had provided full assistance to Ministries of Foreign Affairs and Central Asian parliamentarians in drafting the text of the declaration. The regional statement was announced in the Central Asian Pavilion «5 countries - 1 region - 1 vote». The CAREC pavilion was organized for the first time in the history of the Conference of the Parties. The countries of the region used this platform to inform the world community about national priorities for climate and «green» transition, climate risks and goals. More than 60 events were organized in the Central Asian Pavilion at COP-26.

Following the meeting, the participants supported the intensification and strengthening of actions on the commitments made in the framework of the Paris Agreement and also recommended continuing work on the harmonization of environmental legislation in the Central Asian countries. They supported the initiative to prepare the Regional Statement of the Central Asian States at COP-27 and to hold the 8th meeting of representatives of the Ministry of Foreign Affairs and parliamentarians during COP-27.

The 7th meeting of representatives of the Ministries of Foreign Affairs and parliamentarians of the Central Asian countries on climate change was organized by CAREC with the financial support of Deutsche Gesellschaft fur Internationale Zusammenarbeit (GIZ) GmbH.