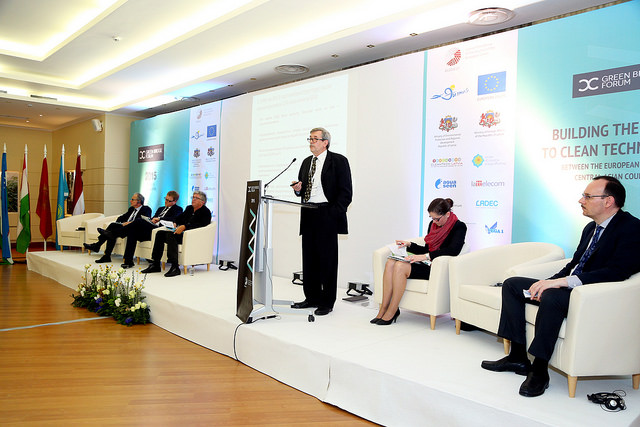 The Forum was attended by 300 delegates from 19 countries, including government officials, clean technology businesses, experts and NGO’s. It was one of the most prominent environment industry events within the Latvian Presidency in the European Union Council, devoted to strengthening cooperation between the EU and Central Asia countries (Kazakhstan, Kyrgizstan, Tajikistan, Turkmenistan, and Uzbekistan), to strengthen environmental governance, and to facilitate the green growth activities across the region.

The Forum speakers were some of the most experienced government representatives, entrepreneurs, investors and other industry experts, EU and international financial institutions implementing green business projects in the EU and Central Asia.

Heinrich Wyes, Deputy Director of the CAREC, took part in the Forum Green Bridge, and presented the CAREC abilities for regional cooperation during the session "Expansion of innovative projects on sustainable clean technologies."

The Forum has proven that the EU and Central Asia countries need to care about various global topics: green business is one of them. Changes in market conditions and policy frameworks can be accelerated through collaboration and partnerships, helping businesses to have their voice heard in policy discussions.

The opening of the Green Bridge Forum 2015 was honoured by the Central Asia high level participants – the First Deputy Foreign Affairs Minister of the Republic of Kazakhstan, Commissioner of the EXPO-2017 Rapil Zhoshybayev, the Deputy Minister of Energy and Industry of the Kyrgyz Republic Nurlan Sadykov, the Deputy Minister of Industry and New Technologies of the Republic of Tajikistan Akram Ruzizoda, the Vice-Minister, Ministry of Oil and Gas Industry and Mineral Resources of Turkmenistan Myratgeldi Meredov, and the Chairman of the State Nature Protection Committee of the Republic Uzbekistan Bakhtiyor Abdusamatov.

“On 2015 important decisions have to be taken in environment and climate areas. It is expected that in autumn during the UN Sustainable Development Summit in New York a global agreement on sustainable development goals after 2015 will be confirmed, and in December during the Paris climate conference a new global agreement on limitation of climate changes after 2020 will be reached. Those decisions will affect both European Union and Central Asia countries in the future. I am certain that the Green Bridge Forum will give a significant contribution to strengthening cooperation between the EU, Kazkhstan, Kirgizstan, Tajikistan, Turkmenistan, and Uzbekistan, and everyone will gain from that.”

The "Green Bridge" initiative first has been developed by Kazakhstan and supported at the Sixth Ministerial Conference on Environment and Development, held by the Economic and Social Commission for Asia and the Pacific (ESCAP) in Astana, in 2010

Action Programme "Green Bridge" plans to cover 95 countries, almost 2/3 of the world's population and over 90% of greenhouse gas emissions.