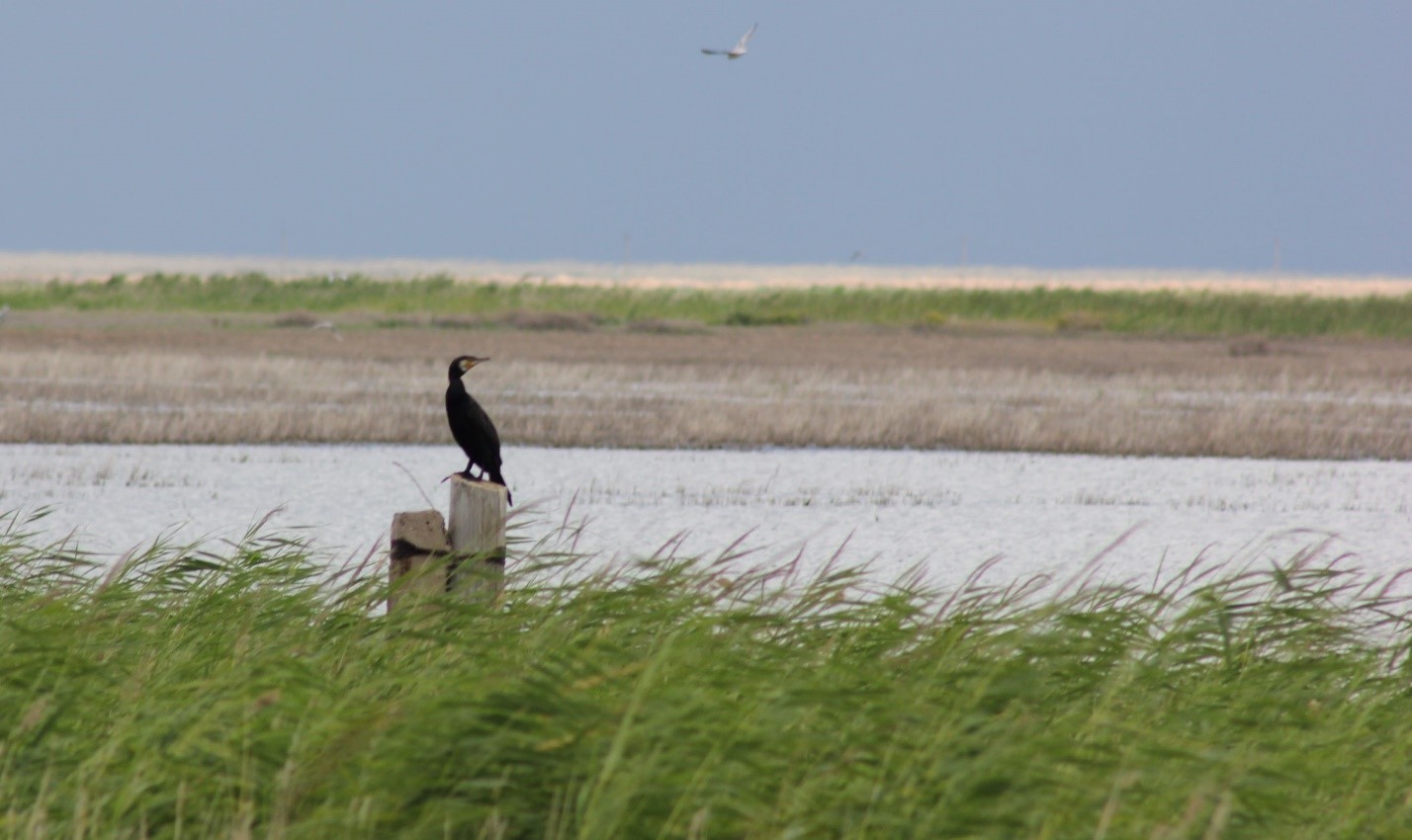 In order to strengthen regional cooperation on conservation and rational use of wetlands in Central Asia the Ramsar Regional Initiative of Central Asia (RRI-CA) was established in 2016. As a first project of the RRI-CA, the Secretariat of the Ramsar Convention and the Government of Japan is currently supporting the project "Update on the status of wetlands in Kazakhstan, Kyrgyzstan, and Turkmenistan by collection and dissemination of good practices for the conservation and sustainable use of wetlands by local communities". 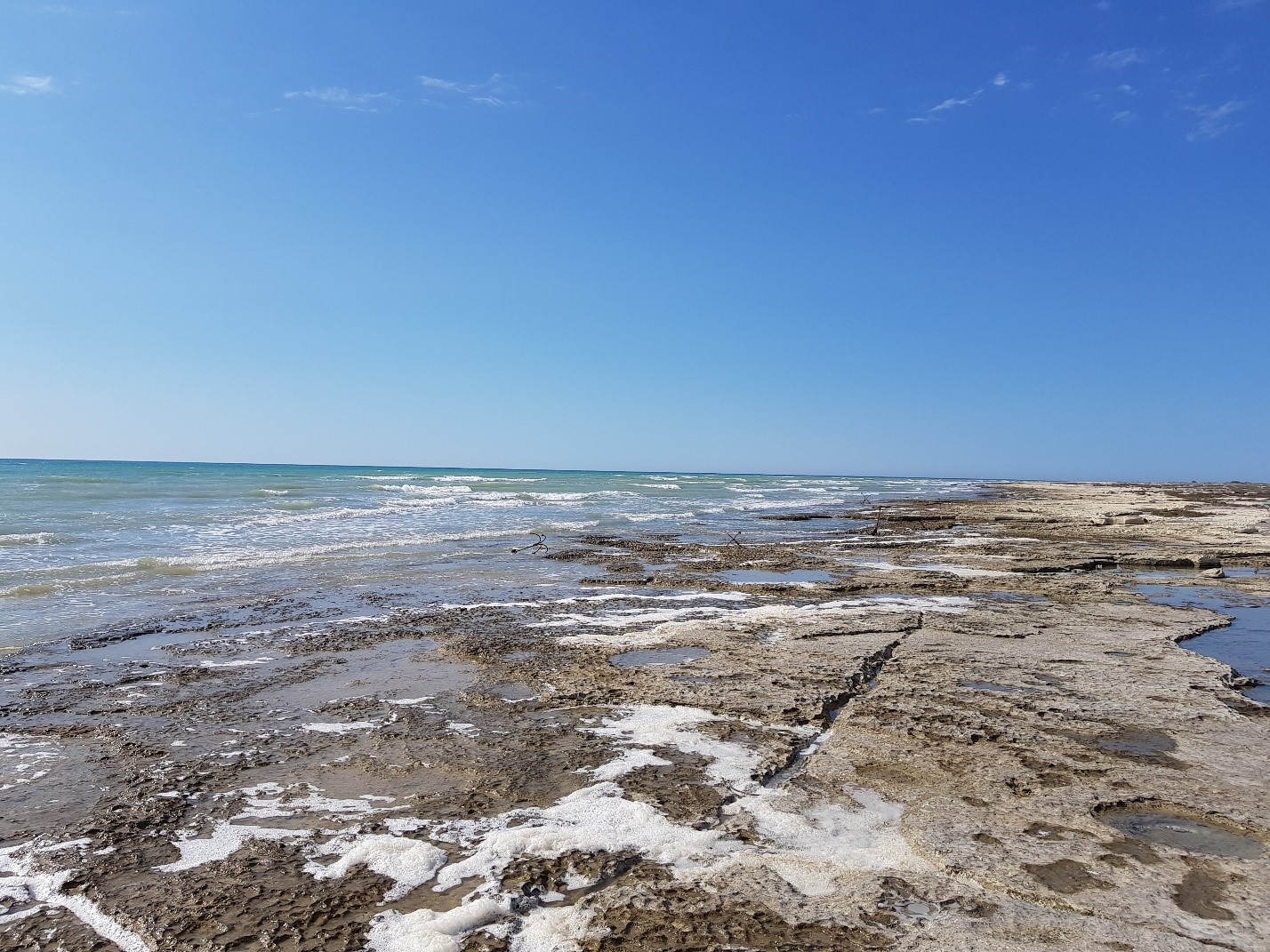 One of the sections of the wetland on the Turkmen coast of the Caspian Sea (photo by E.A. Rustamov)

In the period from July to September 2017, the national experts of the project Adylbek Kozybakov, Askar Davletbakov and Eldar Rustamov conducted field work with the local population in selected wetlands in Kazakhstan, Kyrgyzstan and Turkmenistan. In Kazakhstan, a survey of the local population was carried out at three Ramsar wetlands - Teniz-Korgalzhyn lake system, Alakol-Sasykkol lake system, "Maly Aral and delta of the Syr Darya" wetland, as well as in the system "Tyuleny Island, Lake Karakol and Bokkol", which are not on the Ramsar list. In Kyrgyzstan, studies were conducted on the lakes Issyk-Kul, Son-Kul and Chatyr-Kul, which are included in the Ramsar list of wetlands of international importance. In Turkmenistan, trips were made to the Ramsar Wetland "Turkmenbashi Bay" in the Eastern Caspian, as well as to the potential Ramsar Wetland - Zeyit Reservoir named after the 15th anniversary of Turkmenistan's Independence in East Turkmenistan.

During the field work meetings with representatives of the local government and the local population were held, and materials on the status of wetlands and the use of wetlands by local communities were collected. National expert A. Kozybakov (right), together with a representative of the Alakol Nature Reserve, are developing a route to travel around the wetland "

Representatives of local communities were provided with information on wetlands in the country, on current problems and threats, on implemented and ongoing international projects on aquatic ecosystems and their biodiversity.

An important component of the field stage of the project was conducting surveys of the local population. Surveys were conducted to identify information about how local residents use wetlands, what problems they have and what ways to address they offer.

According to the national expert of Turkmenistan Eldar Rustamov, "Conducting surveys is not only the collection of information, it is also the establishment of contact with local communities. One of the important tasks of our communication with local residents was to address specific people, the holders of knowledge about nature around and interacting with it. At the same time, both we and the respondents have beneficially enriched themselves in the survey process. We were treated with sincere goodwill, they spoke willingly and in detail. Conversations were long and free, and their main goal was to find a common language and determine our common good goals".

Under the guidance of the national expert, respondents were asked to fill out a questionnaire in order to identify the value of wetlands for the local population, the services provided by the wetlands, the impact of anthropogenic factors, the changes that have recently occurred to the site from observations of local residents, and the readiness of the local population to participate in conservation and rational use of wetlands. 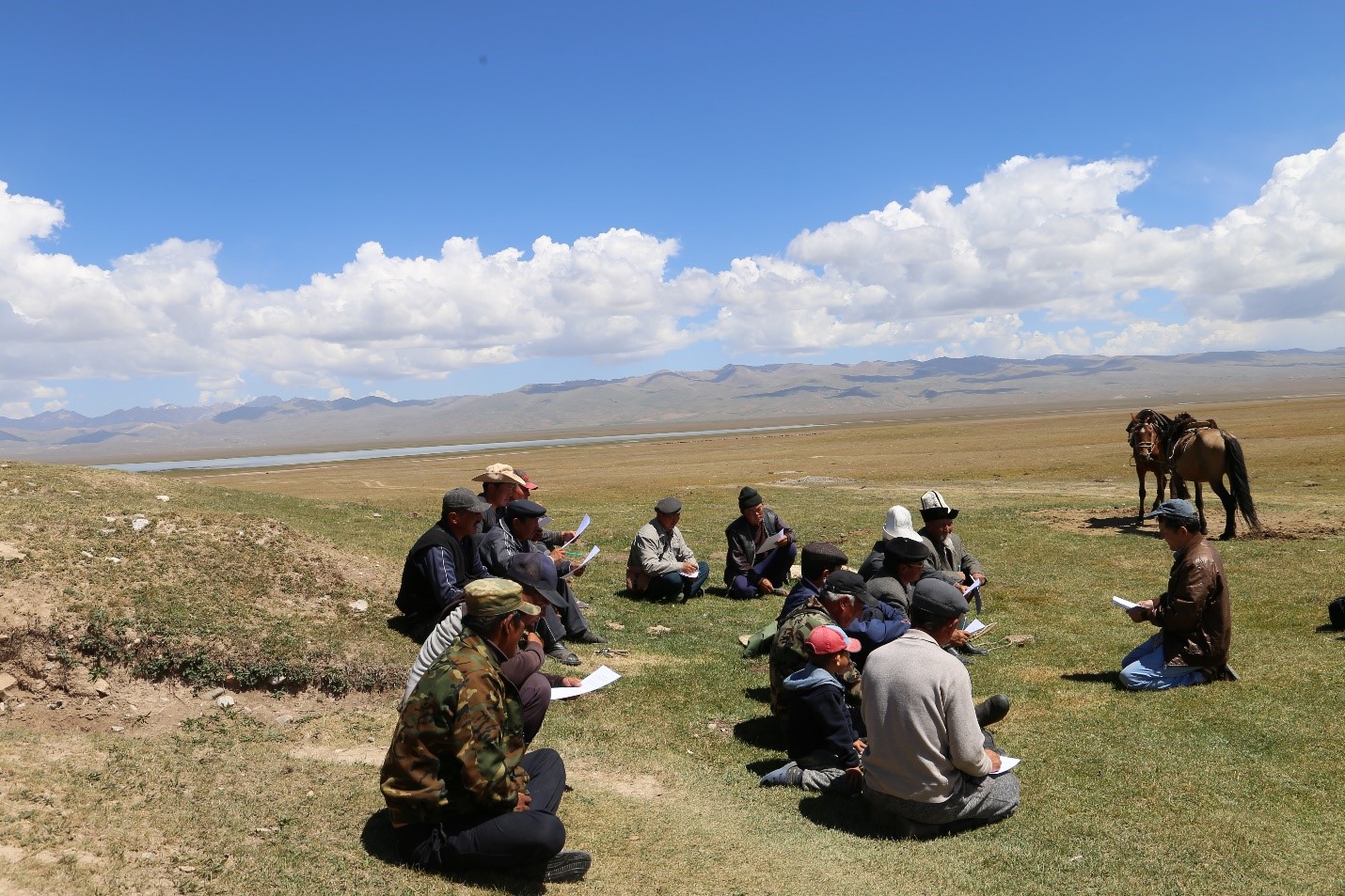 The process of conducting a survey in focus groups in Kyrgyzstan 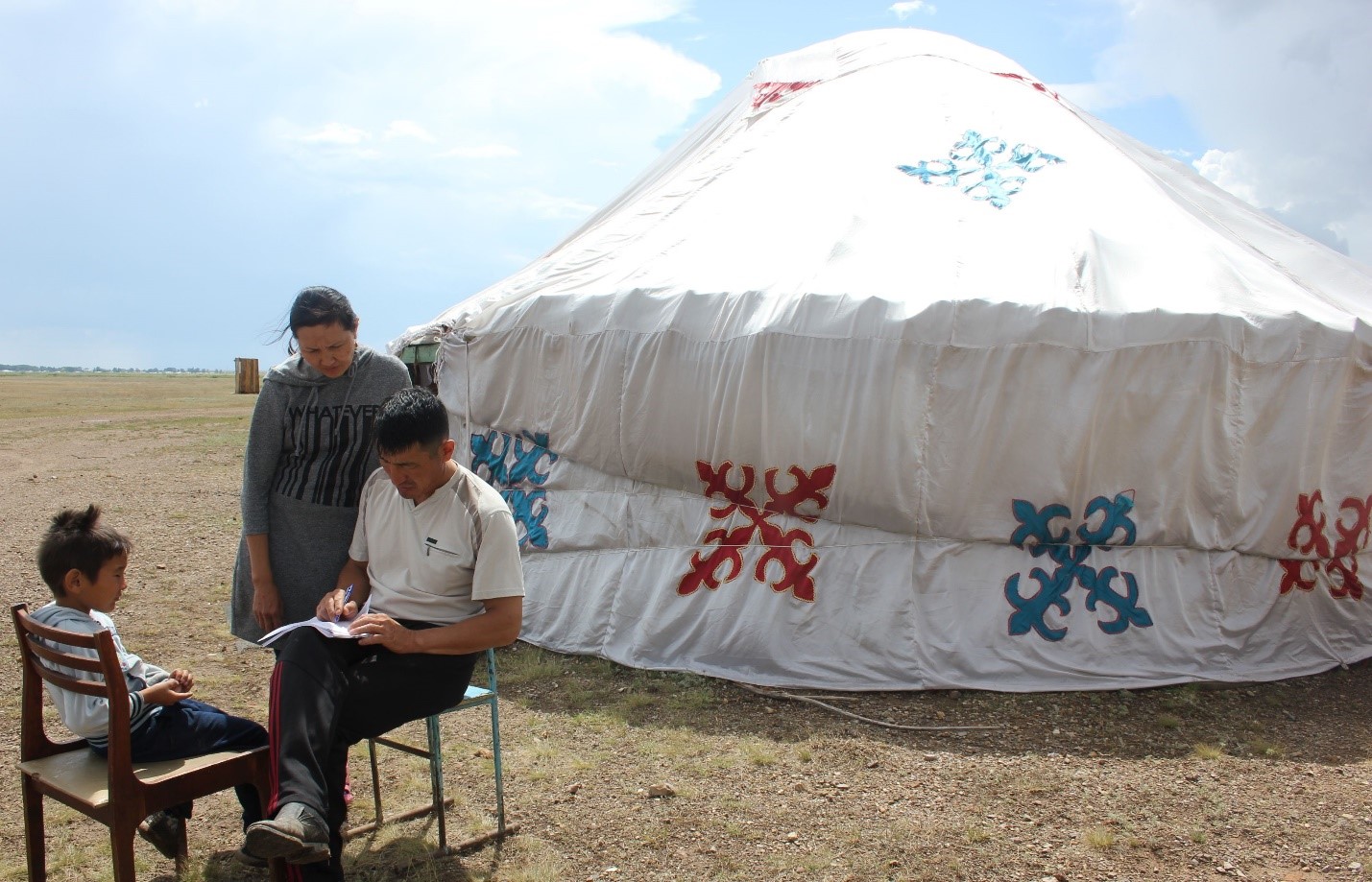 The process of conducting a survey in focus groups in Kazakhstan

According to Askar Davletbakov, the national expert in Kyrgyzstan, "The results of the survey showed interest in the problem of wetlands conservation. We conducted a study of people of different social status and different age groups. The population living in small remote villages and towns are not influenced by mass media due to limited access. In this regard, the administrations of reserves or national parks need to pay more attention to improving relations with local residents, to take measures to ensure their support of wetlands. The purpose of this activity should be to convince the population of the need to protect wetlands, to explain how to do this, to get support from the local residents and create an environment of constant concern for the protected area. Unfortunately, as shown by the survey data, very little work is carried out with the local population. It is desirable to involve local residents in the protection of a wetland, scientific work, maintenance of ecological paths".

During filed trip a visual observation of the overall ecological state of water bodies was conducted. Below are the photos of the national expert Kozybakov, who in general gave a satisfactory assessment of the sanitary condition of the wetlands and coastal areas of visited wetlands in Kazakhstan. 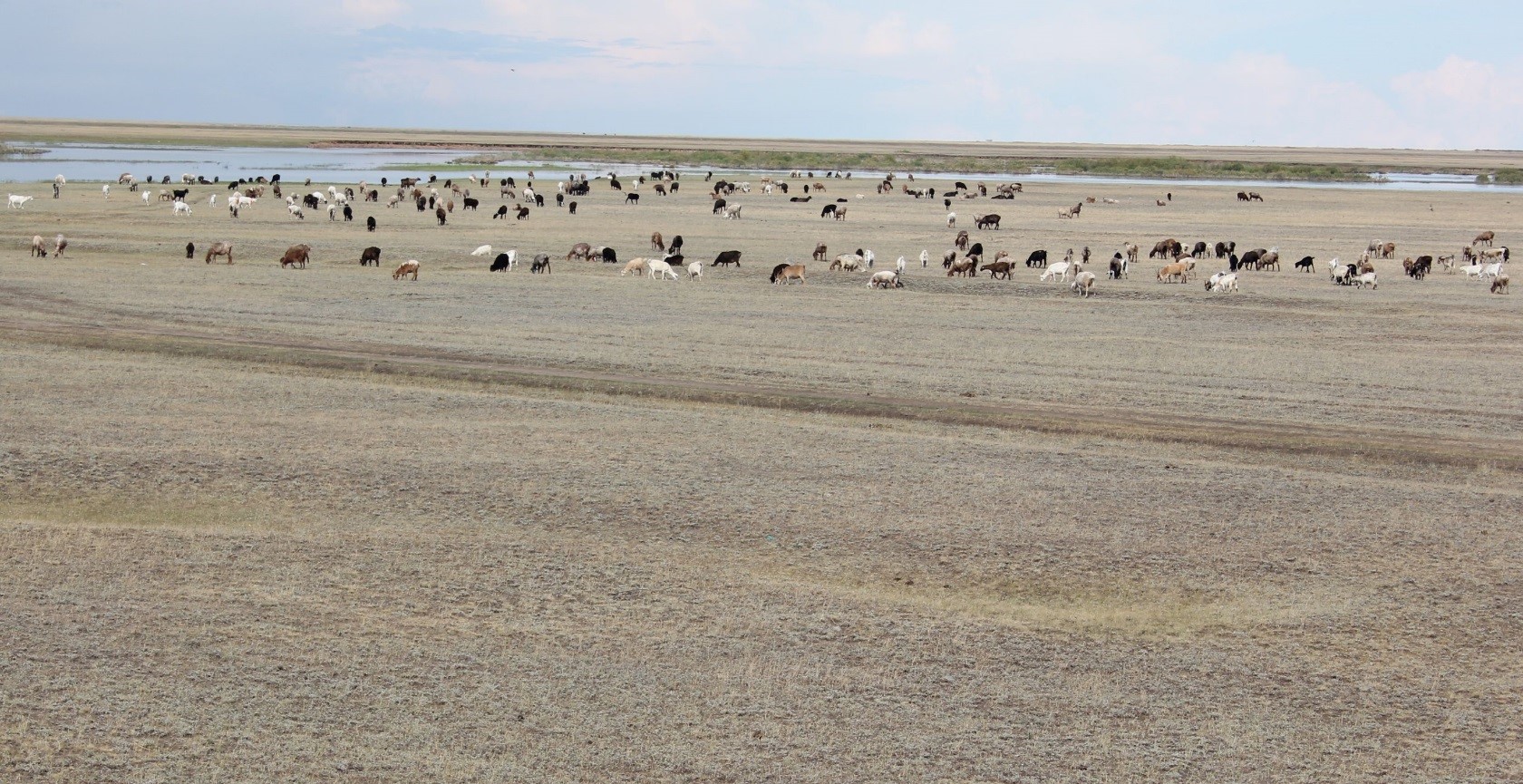 Cattle grazing in the territory adjacent to the Korgalzhyn Reserve

The results of the survey, meetings with local authorities and visual observations, and collected materials on practices for using wetlands are currently used by national experts for the development of the guidelines on best practices of local communities on conservation and management of wetlands in Central Asia (Kazakhstan, Kyrgyzstan, Turkmenistan). It is planned that these guidelines will be presented at an event dedicated to World Wetland Day, which will be held in March next year at selected wetlands in each country.