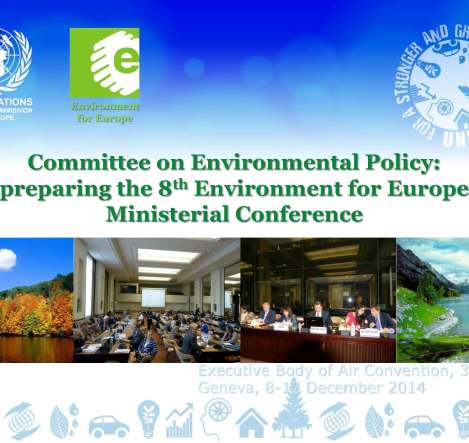 «Environment For Europe» (EfE) process presents political framework for collaboration in the sphere of environmental activities and environment protection management in European region. It is based on unique partnership of states – members of Economic Commission for Europe, organizations of United Nations system presented in this region, other intergovernmental organizations, regional ecologic centers, non-government organizations, private sector and representatives of civil society.

Most important events of this process – conferences of EfE ministries held once every 4-5 years − provide stakeholders with a high-level ground for discussions, decisions making and performing collaborate efforts in the sphere of prior ecologic problems studying in all 56 states of UNECE and serve as а platform for sustainable development at regional level. In the meantime within the framework of this process special attention is paid to the issue of assistance to South-Eastern and Eastern Europe states, Caucasus and Central Asia in the sphere of improvement of their ecologic standards.

In 1998 at the 4th Ministerial Conference in Arhus Ministries of Environment decided to emphasize new independent states with the aim to assist approximation of environmental policy and conditions in Pan-European Region. Having recognized an importance of regional cooperation the Declaration of Ministers approved Cooperative Statement of Ministers on Environmental Protection of Central Asia Region (Almaty, April 22, 1998) and accepted liability on cooperation and support of the decision on preparation and realization of Regional Plan of Action on Environmental Protection within the framework of EfE process. In accordance with the decision taken at the Ministerial Conference The Central Asia Regional Ecological Center was created (CAREC).

At the 5th Ministerial Conference «Environment For Europe» in Kiev (2003) the decision on further support of all Regional Ecological Centers was taken, taking into consideration their role particularly in the provision of impartial platform for cooperation, partnership and exchange of information as well as assistance for civil society involvement in the process of decisions making. Ministers adopted brand new strategy for environmental protection for Eastern Europe countries, Caucasus and Central Asia and greeted the efforts of Central Asia states aimed at the development of Central Asia Initiative on Environmental Protection, Water and Safety «Partnership Invitation» (CAI).

At the 6th European Conference on Environmental Protection in Belgrade (2007) CAI was acknowledged as a platform for multi-sided dialogue aimed at the representation of interests of Central Asia states within the framework of “Environment For Europe” (EfE) Process, as well as assistance in realization of programs and projects for the achieving of goals of this process in Central Asia by means of CAREC where possible. CAI is aimed at the inclusion of additional estimation of sustainable development to the agenda of environmental protection and efforts directed to the solution of problems with limitation of nature resources, poverty and unbalanced economic development in the region by way of cooperation with international organizations and donor society as well as partnership between governments, private sector and civil society.

The 7th Ministerial Conference “Environment For Europe” endorsed an initiative called “Green Bridge” and Partnership Program offered by Kazakhstan and appealed governments of stakeholders, international finance institutions, private sector and other stakeholders for joining the initiative and assistance in sustainable, fair and prosperous future in European, Asian and Pacific Regions.

The 8th Ministerial Conference “Environment For Europe” is scheduled to be held Batumi, Georgia, on 8th-10th of June 2016. Ecologic Policy Committee of Economic Commission for Europe made a decision on the main themes of the Conference: «Ecologization of Economics in Pan-European Region»; and «Improvement of Air Quality For the Benefit of Environmental and Human Health Enhancement». Besides during the Conference a high-level meeting on the subject of «Education for the Benefit of Sustainable Development» (ESD) aimed at progress assessment, reached during first 10 years of the realization of UNECE Strategy for ESD as well as discussion of its further development. Progress obtained in the development of the unified system of ecological information in Pan-European Region will be also considered.

Within the framework of the 8th Ministerial Conference CAREC assisted by sub-regional office of UNEP for Central Asia in cooperation with Executive Committee of IFAS, UNECE and GIZ will organize regional side-event «Ecologization of Economics and Sustainable Development in Central Asia – Achievements and Upcoming Steps» on the 9th of June, 2016. During the side-event discussion of the progress of decisions execution of the 7th Ministerial Conference in Astana will be organized, regional perspective will be presented and further steps of the region in the ecologization of economics will be developed.

We invite all stakeholders for the participation in a parallel event.