The 21st session of the Chu-Talas Water Commission

The 21st session of the Chu-Talas Water Commission 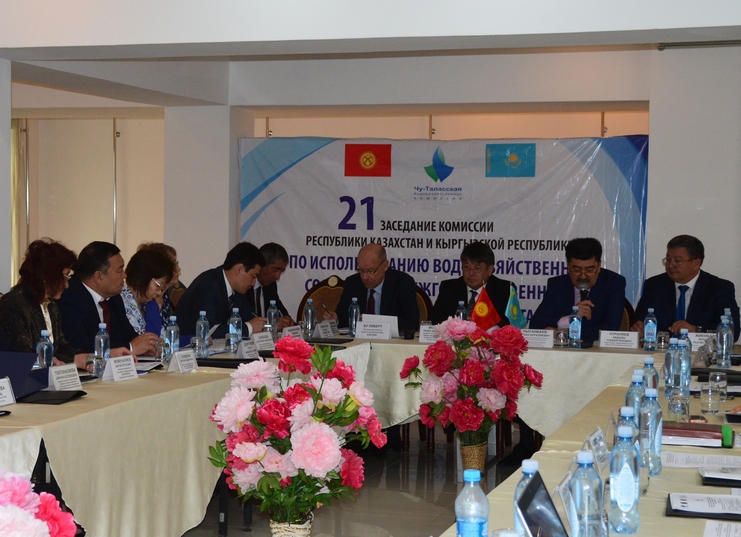 On April 20th, 2016 the 21st session of the Commission of the Republic of Kazakhstan and the Kyrgyz Republic on the Use of Water Management Facilities of Intergovernmental Status on Chu and Talas Rivers was held in Taraz.

The key issue on the agenda was the presentation on execution of the decisions, made at the previous session of the Commission. The following issues were discussed in the meeting: the implementation of current projects on Exploitation of software complex designed for Talas River and further development of its functional capabilities, the mutual provision of updated materials on land allotment for the construction of reservoirs on the Aspara River, etc.

Besides the work of the Commission itself, there were other programs and projects announced, with an implementation area in the Chu and Talas Rivers’ Basin. CAREC also made a presentation of the “Smart Waters” project, implemented with the financial support of the US Agency for International Development (USAID).

During the past three years CAREC has been working in the Aspara River Basin, which is a sub-basin of the Chu River. On the 21st session of the Commission CAREC made a presentation on the progress of the project performance on Aspara River and introduced a new USAID-CAREC “Smart Waters” project. On the basis of the preliminary results of needs’ assessment in the countries, the Department of Water Resources and Land Reclamation of the Kyrgyz Republic and the Committee for Water Resources at the Ministry of Agriculture of the Republic of Kazakhstan previously expressed a common wish to continue the work in the Aspara River basin within “Smart Waters” project framework, as well as to consider the possibility of working in the basin of Kurkureu River, which is a part of the Chu-Talas basin.

In general, the Commission approved the USAID-CAREC “Smart Waters” project and pointed out CAREC’s successful approach to project implementation, which is based on needs’ assessment and prior consultation with the countries.