In early June this year, the Central Asian International Environmental Forum was held in Ashgabat, organized by CAREC in conjunction with the State Committee for Environmental Protection and Land Resources of Turkmenistan. Within three days the state, scientific, public and international organizations considered regional environmental problems, including issues of adaptation to climate change.

What needs to be known today and what resources the Central Asian countries can use to implement the national plans for climate change is in our conversation with Ms. Olga Pilifosova, Manager for Adaptation Program in the United Nations Framework Convention on Climate Change (UNFCCC) Secretariat. 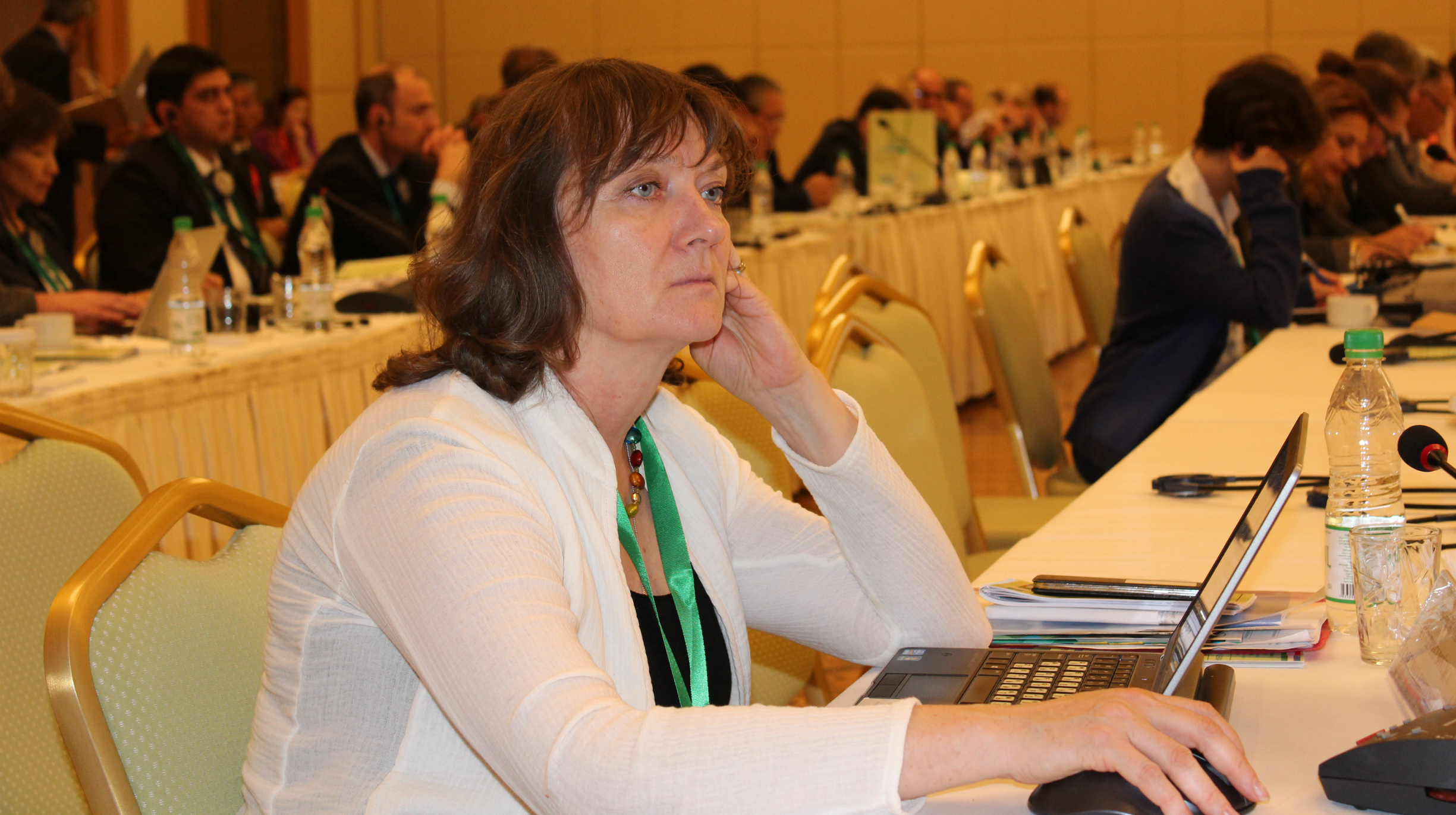 - Olga, the Central Asian International Environmental Forum’s theme – "Climate Change and Water Cooperation in the context of Sustainable Development in Central Asia" clearly reflects the regional agenda, which is useful for considering in such common dialogue platforms. But, what is the significance of this event for you?

- First of all, the forum is interesting for me, as for an international organization’s representative supporting the countries in implementing the decisions that were adopted within the framework of the UNFCCC. This is an opportunity to receive information first-hand: which issues are currently being considered as priorities, what barriers and what kind of additional opportunities exist for the decisions implementation.

Secondly, I was asked to talk in my speech about the key aspects of the international processes - the UNFCCC and linkages with the Sustainable Development Goals 2030 (SDG). I consider this very important, since it is an opportunity to inform the participants who are directly involved in the implementation of policies and measures for adaptation to climate change, share what, in our opinion, can help them in the most effective implementation of these measures.

I got the impression that the region countries do not always and not fully use what they really can get within the framework of the support specified in the Paris Agreement. And this is technical support, exchange of knowledge being provided by our process, development of an agreed position in the negotiations, and, of course, financial support.

- In that case, please list the areas, «points for improvement» to pay special attention to?

- In my speech, I spoke about the need to draw up national adaptation plans. Why is it so important?

Today, we see many projects that allow to solve and study the adaptation possibilities on the particular problem example. It is good, but it is impossible to implement measures that would be sustainable and related to the general SDGs, if there is no systemic approach based on an analysis of the national features, regional needs, basic priorities, and deep technical development of the projects that will be part of a large national adaptation plan.

Elements of such plans already exist in the region countries. It seems that it is possible to collect all together into a single document that represents a national plan in order to submit it to the Secretariat for registration. There is an opportunity to gain access to financing through the Green Climate Fund and to develop and implement plans.

We know that from 2020, countries will receive up to $ 100 million a year to implement the climate measures. Half should be used to support adaptation. It's a lot! Each developing country can declare its need for the use of this funds. But what will the country present to justify the application? If the country does not have a transparent, reliable, prepared on the basis of the approved UNFCCC manual, and confirmed by all parties at the national level, the adaptation plan on hand, this situation can again lead to disparate projects that may be useful, but will not solve the problem radically.

And one more aspect: currently in the post-Paris process of the UNFCCC there are negotiations that clarify the Agreement implementation mechanisms and rules. While supporting these negotiations, we do not yet see the general coordinated team work by the Central Asian countries, influence on the global negotiations process.

- Does it mean that, we can say, this situation is the need for the CA countries common vision of themselves as a region?

- From the participants speeches here, at the forum, it can be said that such a vision might be useful on a number of issues. Some technical issues of the country can already be solved jointly, for example, to coordinate approach to donor organizations, perhaps there are also the regional policy issues that should be brought to the international level, not in terms of opposition, but in terms of the region's constructive contribution to the international cooperation.

- You are now talking about the regional cooperation in some of its forms. Which of them seem to you the most effective?

- It is not for me, perhaps, to advise which specific forms are needed in this region, but there are elements that seem to be important for any cooperation. First of all, it is necessary to see clear final goal: where we are going, what we want to achieve. It is not only a beautiful future in general, but how it will manifest itself in specific indicators.

Secondly, it is important to monitor how these regional efforts are consistent with the trends that countries have resolved globally. In this sense, the Paris Agreement was unprecedented: the heads of state of almost the whole world gathered for its discussion and adoption. No process in the world - neither war, nor trade, nor financial arrangements has done it before. Something truly global has been decided, something that shall touch all countries with no exception, that's why we need to keep our hand on the international pulse.

- About the Paris Agreement. Now we constantly hear about it from the political arena, it appears in almost every news bulletin - I am speaking, of course, about the US withdrawal from the Paris Agreement. According to the head of the European Commission Jean-Claude Juncker, despite this, the agreement implementation process continues in the same vein. For example, in early June, Beijing and the EU already informed the world community about their plans to fulfil their obligations within the framework of the Paris Agreement. How do you assess this situation? What consequences are to be expected?

- It is important, without superfluous emotions to understand that there are several aspects of this phenomena. As a member of the Secretariat, I should, first of all, mention the legal process side. A country announces that it wants to withdraw from the Paris Agreement after its ratification. No country can directly withdraw from it tomorrow, - in fact the withdrawal statement will be implemented only three years after the agreement was ratified, i.e. for the US in 2019. Plus, one year for the very withdrawal.

Secondly, the US President's statement says that the country wants to open and revise the Agreement, start new negotiations and make changes. Such a proposal can be made by any country, and changes can be made if there is an agreement of all the parties to the convention, since the Paris Agreement, like the UN Convention, operates on the basis of consensus.

Thirdly, we will have to analyse what kind of changes are proposed. There was a lot of rhetoric in the announcement and political statements, but we cannot talk right now about specific consequences for the process, as such.

If we talk about the essence of the matter, we have to understand that the Paris Agreement is not philanthropy, this agreement reflects the geopolitical and economic realities. Countries, economic communities, and businesses - the majority took a course on the large-scale structural changes in energy, the transition from fossils to alternative energy sources. According to many experts and international commentators, the use of wind and sun is already in many cases cheaper than the energy production based on the fossil fuels. This process, like the relevant technologies, continues to develop rapidly, and it is hardly possible to stop it. For instance, more than twenty of the world's largest corporations, more than a hundred of the largest cities, companies - you can see in the Internet search engines - have already taken the course to transform their economy on the basis of the "green" energy. According to a number of forecasts, renewable sources in many countries of the world will completely dominate after a couple of decades.

Paradoxically, another side of the US president's statement proved to be a positive trigger: many countries have already stated that they are increasing, and not simply retaining, their efforts to fulfil their national obligations under the Paris Agreement. Some countries that signed, but previously have not been actively supporting it, started to support it publicly. In the United States itself, large businesses and a number of states with a population of more than one-fifth of the US population, have announced full support and continuation of strengthening the measures for the clean energy development. As for the actions to adapt to a changing climate, they are not disputed by anyone.

- Let us conclude by clarifying that you mentioned that you see the possibility of more active use by the Central Asian countries the support provided by the relevant funds and institutions for activities in the field of adaptation. Given that you have seen and heard, what are your next steps?

- As usual, upon arrival at the Secretariat, we submit a report, and determine what points resonate with our work. One of the conclusions I would like to share is the need to further develop the dissemination of information and support for activities on national adaptation plans and the importance of the regional aspects in this process. I also hope that some of our recommendations included in my presentation will be useful and will be reflected in the forum’s future work.