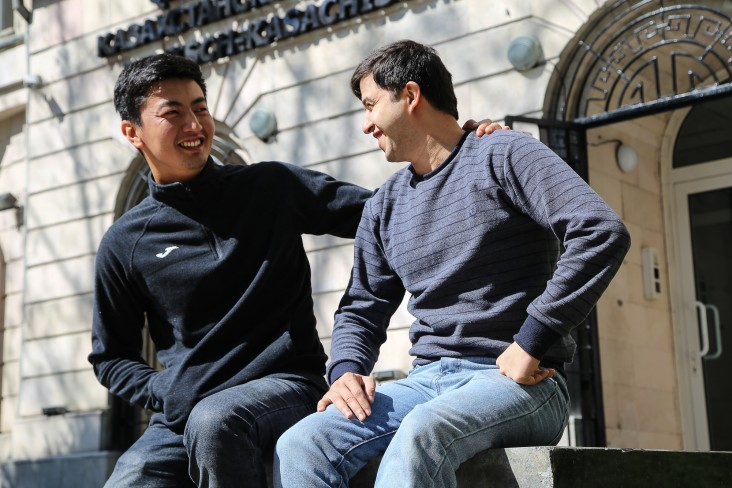 Scholarships bring students in Central Asia together to solve cross-border water conflicts; first as friends and then as colleagues.

“I thought the water belonged to us, the Republic of Kyrgyzstan,” says Kanatbek Turatbek Uulu, referring to the rivers that supply his country with water. As he speaks, he looks at his friend Alijon Qurbonov, who comes from Tajikistan, Kyrgyzstan’s downstream neighbor.  “And I always asked why we had to give Uzbekistan water from our country,” Qurbonov says, referencing Tajikistan’s large neighbor to the west.

Turatbek Uulu and Qurbonov are getting master’s degrees in Integrated Water Resources Management (IWRM) and are roommates at Kazakh German University in Almaty, Kazakhstan. Both men are part of a bold scholarship program, funded by United States Agency for International Development (USAID),that is bringing together students from across Central Asia to learn together and develop friendships and professional collaborations that will ultimately help their countries solve often contentious cross border water resource issues.

For many years, water has been a source of conflict across the Central Asia region. Following the fall of the Soviet Union, over 200 rivers in Kazakhstan, Kyrgyzstan, Tajikistan, Turkmenistan, Uzbekistan, and neighboring Afghanistan were divided by international borders. This has resulted in formidable challenges to water resources management. Different nations want to use the same water for rival objectives and countries downstream feel left to the mercy of those upstream. Once freely shared, expert knowledge became isolated in select nations. As borders were drawn between former colleagues, infrastructure and relationships crumbled, resulting in massive water losses, unchecked pollution, and heavy impacts on the natural environment. Training, improved irrigation systems and water legislation are only some of the urgent needs the region is facing.

“Before (graduate school), I thought that people from neighboring countries weren’t the same as us…that they have different cultures and see the world differently than we do,” says Turatbek Uulu with a laugh. “Now that I have many friends from these countries, I see they are the same as me. Their people are as good as my people.” Qurbonov quickly adds, “after living together, he is getting more like me and I am getting more like him!”

The impact of a friendship like this will ripple far beyond the walls of the university. “Now I think that to better manage water, we need more friendships,” says Qurbonov. “We need to share our resources.”

Building relationships across the region’s international borders are part of the scholarships’ aims. “We believe that these are the future leaders,” says Marhabo Yodalieva, Water Program Coordinator at Kazakh German University. Various state bodies nominate candidates for the scholarships, and students sign an agreement to return to their home country on completion of their studies. “We aim to change their mindsets,” says Yodalieva. “When the students go back and work in their countries, they go back with new perceptions.”

Turatbek Uulu and Qurbonov are not alone. A whole new generation of experts from Central Asia and neighboring Afghanistan are being trained together. Since April 2016, under USAID’s Smart Waters project, 18 scholarships for a two-year master’s degree in IWRM have been awarded to young people from throughout the region. As this new generation of water specialists begins work in their countries’ water agencies, they have the support of close-knit group of alumni. The deep bonds they formed during graduate school will allow them to cooperate on complex water management issues across borders– something that was once unheard of.

For Turatbek Uulu and Qurbonov, the transformation in their thinking is as clear as the water that brought them together. “Because of this course, I’ve realized that water is not just for one country; it’s for all of the countries crossed by the rivers,” says Turatbek Uulu. “Watershed management is not just about building hydropower plants or developing agriculture; it also relates to other sectors that affect social issues and economics. We need to solve all of these problems together with our neighbors.”

According to Qurbonov, his earlier thinking about water management was too limited. “Now I’m not only thinking about myself, my family, and my country, but also the upstream and downstream countries that don’t have water. I think about all the places in the world with water problems.”

The USAID supported Smart Waters Project helps bring the countries in Central Asia together with Afghanistan by creating a network of like-minded water management specialists and policy makers across multiple levels. The project is implemented by the Regional Environmental Centre for Central Asia (CAREC).