Results of the UzWaterAware drawing and essay contest for children 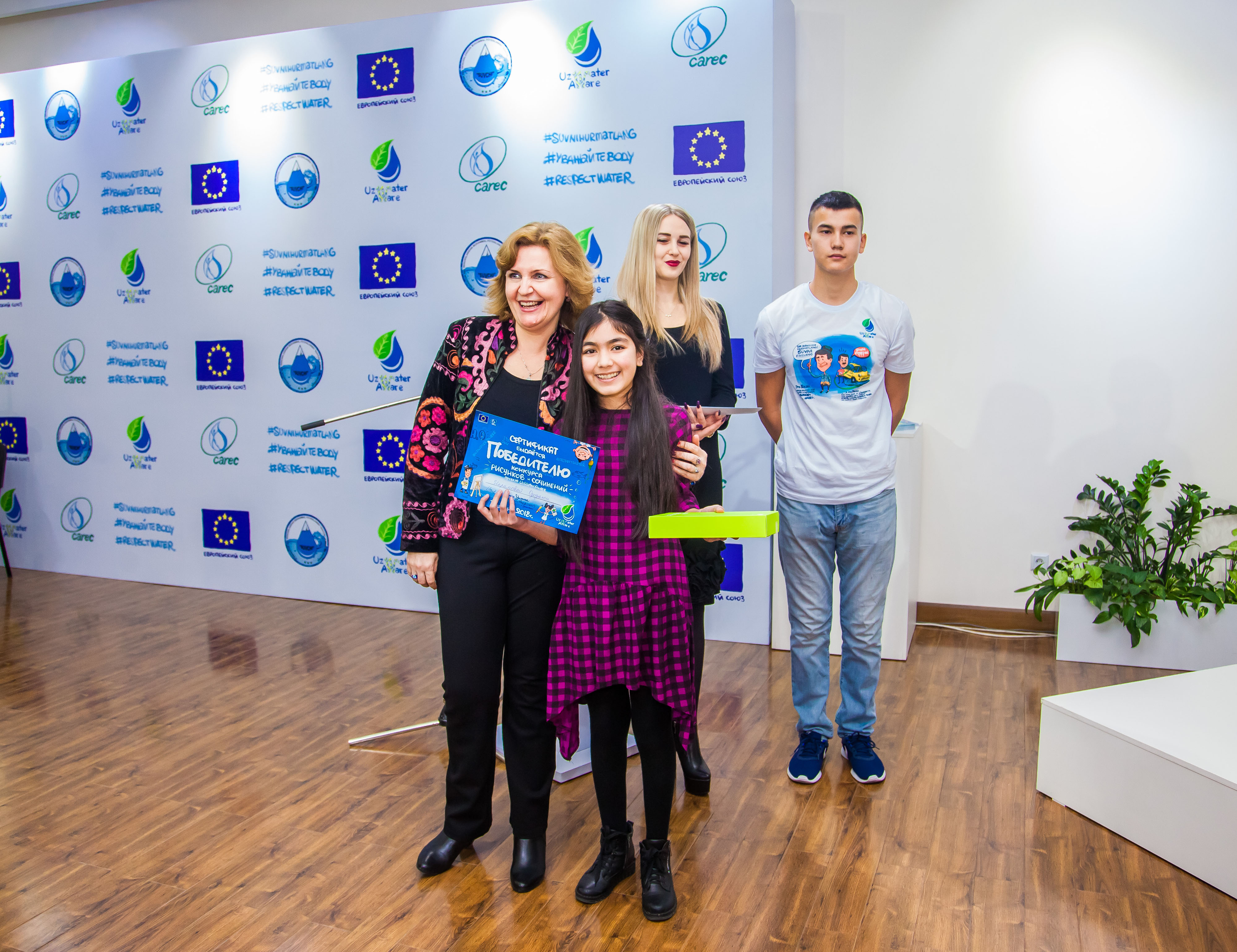 TASHKENT. On 2 November the UzWaterAware project awarded the winners of the children’s contest. The ceremony was held at the opening of the digital exhibition, where the winners’ drawings were presented. Exhibition was open on 3-4 November in Tashkent in Autograph Art Gallery. The event was organized by CAREC with the financial support of the European Union and with the participation of the Ministry of Water Resources of the Republic of Uzbekistan and the State Committee on Ecology and Environmental Protection.

«As part of our project, working with children is of particular importance because it is important from the very childhood to inculcate a respectful attitude to water, nature and the environment in general. The drawings and essays that we received convey a deep meaning - how children see our influence on the world, what the consequences might be. We were pleased that the future generation is not indifferent to the problems, they are already paying attention to them. They approached the topic of the contest philosophically and made us think once again and understand that it is extremely important to take measures in order to preserve the future of our children», says the UzWaterAware project manager Jusipbek Kazbekov.

The contest was divided into two main directions: paintings and essays with three age categories from 6 to 16 – 1-4 grades, 5-7 and 8-9 grades. The works gathered from March till September 2018. In total, 300 works were received: 273 bright and colourful paintings and 37 interesting essays from various regions of Uzbekistan.

To sum up the results of the competition a special jury was invited to identify the winners. The representatives from the Ministry of Water Resources, the State Committee on Ecology and mass media chose 18 best works – 9 winners with three awarding places in each age category of two directions. The contest was also supported by the Republican Children’s Creativity Centre “Barkamol avlod” on environment and ecology. Congratulation speeches were given by the Head of the EU Delegation to Uzbekistan Ambassador Eduards Stiprais, Deputy Chairman of the State Committee on Ecology and Environmental Protection Mr. Uktam Utaev, the Head of the City Department of the State Committee on Ecology Mr. Nodirjon Yunusov, the Head of the Department of the Ministry of Water Resources Mr. Shavkat Usmanov, Director of CAREC Branch in Uzbekistan Ms. Shakhnoza Umarova and Director of “Barkamo avlod” Mr. Masumkhon Khakimov.

18 winners were awarded by the UzWaterAware project with notebooks, tablets and smartphones. Special awards were given to four participants from Tashkent by the City Department of the State Committee on Ecology.Download the list of winners.

In addition, 9 special awards were initiated within the contest for children with special needs from Urgench, Chirchik and Tashkent cities. It should be noted that all other participants of the contest, their parents and teachers received consolation prizes from the project – eco-bags, T-shirts, bandanas, children’s magazine “Rodnichok” (“Buloqcha”). 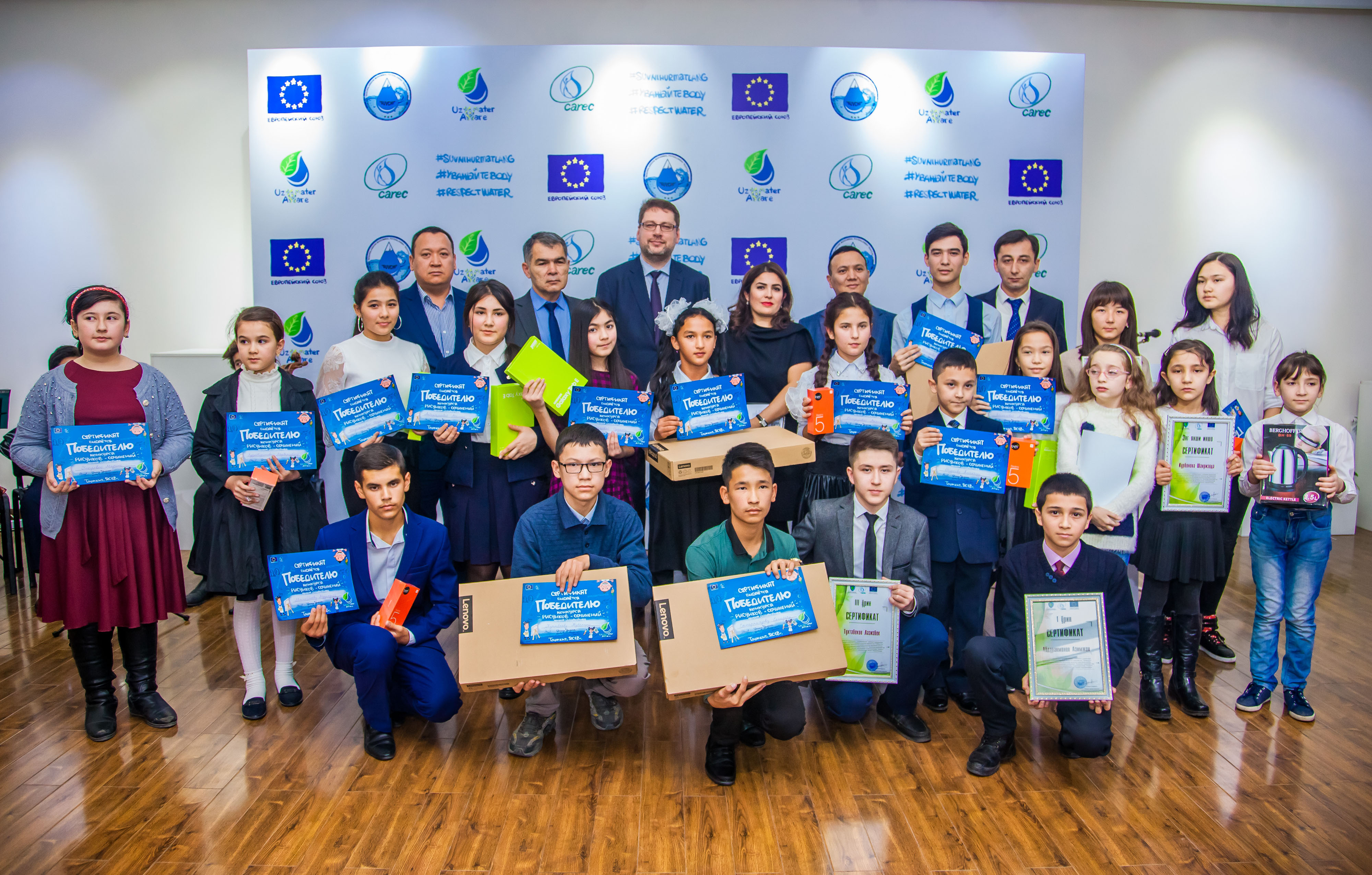