Demonstration tour to Kazakhstan part of the Aral-Syrdarya basin 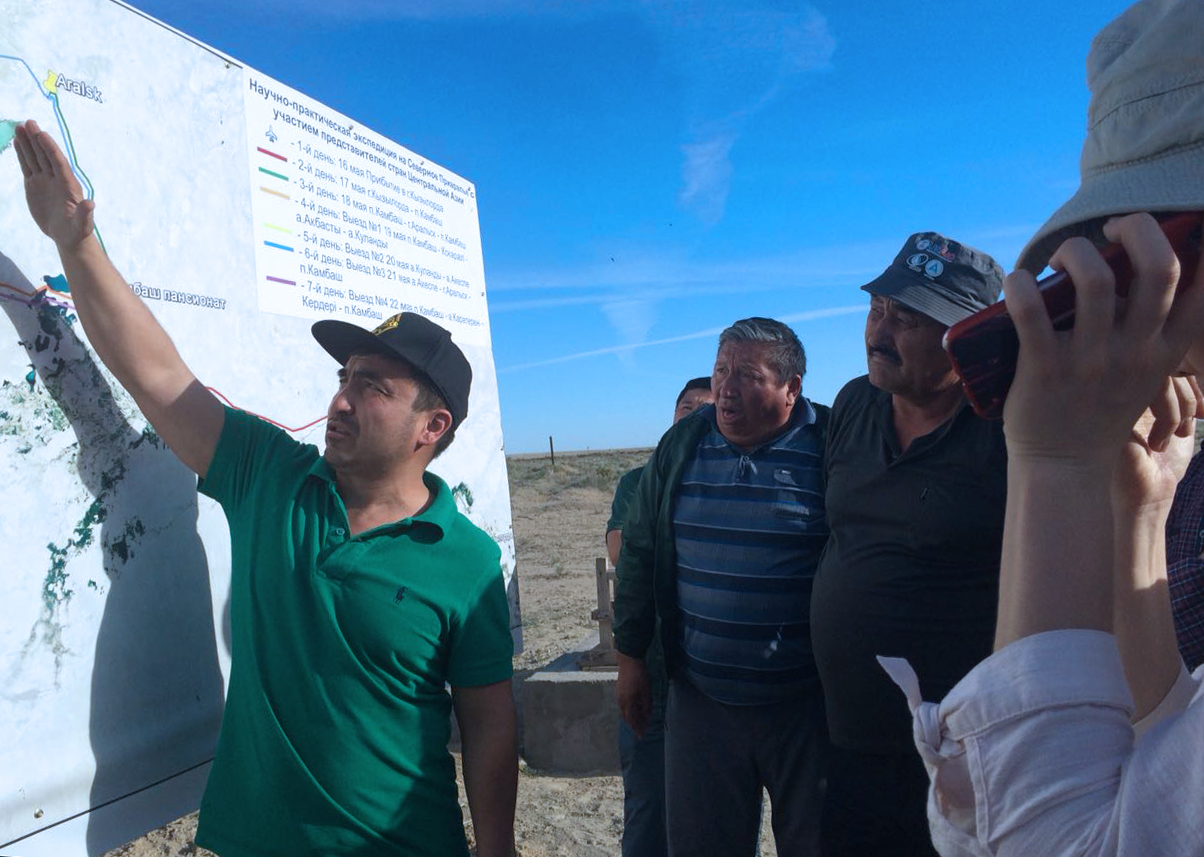 In the period of May 22 to 26, the regional demonstration tour to Kazakhstan part of the Aral-Syrdarya basin took place. The tour included the scientific and practical conference “The Aral Sea in the stream of modern history” on May 24. The trip started from the Shymkent with the Shardara dam as the first object on the route and ended on Kokaral dam on the shore of the North Aral Sea (Small Aral Sea).

The expedition was organized by the Executive Board of the International Fund for Saving the Aral Sea (ED IFAS) within the CAREC-USAID joint project Smart Waters. The demonstrational tour and the conference were conducted in line with the work plan of the IFAS Executive Committee, approved by the IFAS Board meeting on January 30, 2018.

Participants were representing the ministries of the foreign affairs, national bodies on water resources management and environmental protection, hydrometeorological centres of Central Asian states and Afghanistan. Also, scientific institutes, small transboundary watersheds of the Smart Waters project, as well as international organizations, USAID and OSCE, took part in the event.

“A picture is worth a thousand words” – that was the motto of the tour, as the majority of participants hardly saw half of all the facilities, that have been visited during the tour. During the first day of the tour, several objects were visited, inter alia Shardara dam, Dostyk irrigation canal, Arnasay cavity, Kyzylqum irrigation canal, Koksaray counter-regulator. 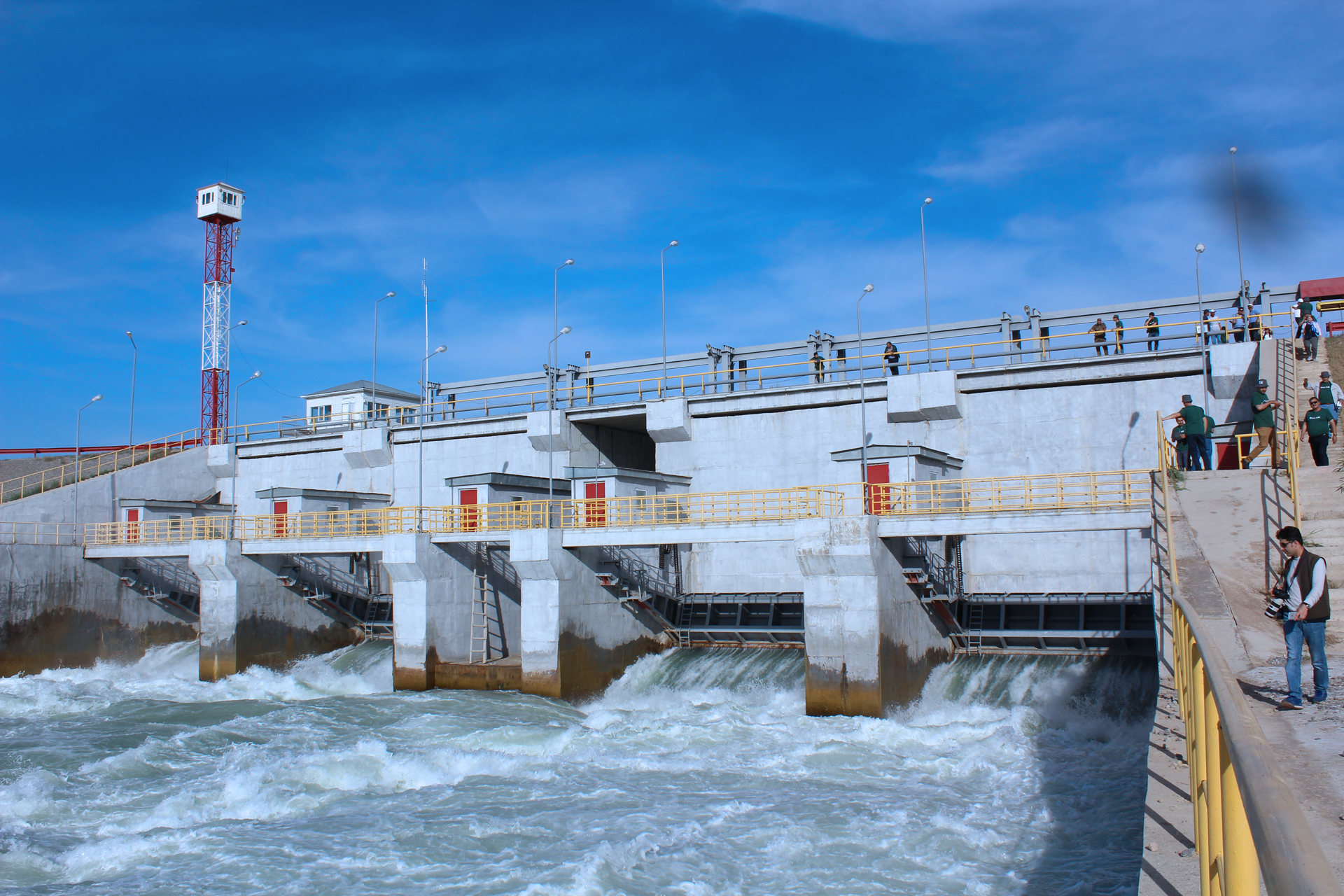 On the second day of the tour Novo-Shielsky main irrigation canal, Kyzylorda hydroelectric complex and the nonrigid dam were visited. “The nonrigid dam is a unique object. For the downstream countries, who strongly depend on water flow from upstream, this is a very nice option for saving water and using it during vegetation period” – said Guych Abayev, representative of the IFAS Executive Committee.

It is important to mention, that this is the second nonrigid dam on Syrdarya river, the first was put in commission in 2013. These dams aim to increase the quantity of irrigation water for the agricultural lands of Shiely region of Kyzylorda Oblast. In the past, during the dry years, 550-650 m3/s of water was received from the Shardara dam and Koksaray counter-regulator. Now, thanks to this nonrigid dams, it is possible to leak 450-500 m3/s, which can lead to water saving of up to 1 bln m3 per annum. This saved water in its turn can be used for the flooding of pastures and support the regions’ ecosystems, as well as for increasing the agricultural lands for up to 50-60 thousand hectares. Thus, construction of nonrigid dams on Syrdarya river on the territory of Kyzylorda Oblast allows not only improving agricultural production in the region but also positively affects on the economy and the level of local communities’ lives.

“Organization of the demonstration tour was a really good idea, which opened the platform for interactive cooperation among all six countries of the basin. Not only visiting the facilities, understanding how it works but also interaction, opinions and ideas exchange among the participants – that is what is really important for us” – Gulzada Azhetova, USAID water sector team lead and the Smart Waters project coordinator, sharing her impressions.

The tour indeed gave the opportunity to discuss the seen facilities, share experience, and think together about the possibilities of future cooperation on the issues related to the Aral Sea and its region. Participants discussed all these during the international scientific and practical conference “The Aral Sea in the stream of modern history” , which was held on May 24 in Kyzylorda. “All the participants mentioned the importance of increasing regional cooperation with Afghanistan on water management issues. And I wish that the cooperation around the Aral Sea basin will become the impulse for even broader and longstanding cooperation among our countries” – said Sadraddin Sayah, director of Kyndyz department of the Afghanistan National Environmental Protection Agency (NEPA).

During the fourth day of the tour, participants visited several objects aimed at introduction of water saving technologies in agriculture, inter alia – drip irrigation, including for rice production. Parties visited the canal, which is equipped with the automated water counting and monitoring system, and the scientific-tourist centre of the ED IFAS on the Kamystybas lake.

On the fifth day, participants reached the North Aral Sea. They visited the Aklak hydro-technical facility, which serves to maintain the water level in the coastal lake system, and the Kokaral dam, which is maintaining the water level in the North Aral Sea and saves it from further drying. The road from Aklak to Kokaral is 30 km length, but takes 1,5 hours to drive, as the road condition is bad due to constant winds and storms. In the past, all this way was covered by the Aral Sea. “Before the Aklak and Kokaral were constructed, all this territory was covered by the “moon landscape (when the soil is not covered by any type of vegetation – author’s note)” – says Ermek Aitbanov, expert of the ED IFAS in Kyzylorda, - “now shrubs and saxaul grow here, which indicates the improvement of the ecological state of the territory due to the accumulation of groundwater. Due to fishing in coastal lakes, local residents are able to earn money, this reduced the migration and improved their socioeconomic status”.

The Kokaral dam is 13 kilometres long. Its construction started in 2005 and was aimed at saving the level of the Aral Sea on the absolute elevation of 42 m. At the moment, the dam is not equipped with a fishtail, which prevents the fish from going up to the Sea for spawning. The fish shoals are stuck in front of the dam, trying to "jump" on the structure, but ineffectively. Of course, it is caught for sale, however, this does not allow the fish to reproduce in the Sea itself, which can affect its quantity in the future. According to the ED IFAS staff, the construction of a fishtail at the dam is in the plans for implementation in the near future.

After the Kokaral dam, participants went back to Kyzylorda city. During the long trip, there was enough time for thinking on all seen in the tour. Alimardan Khujakulov, a lecturer at the Tashkent Institute of Engineers of Irrigation and Mechanization of Agriculture and the environmental specialist, shared his impression: “I wish the Aral Sea is being considered as one body without sharing on South and North. This is the only correct way of thinking about it”.  It is too early to strike a balance of the tour. But the organizers are sure that the participants of the demonstration tour went home full of impressions and thoughts on further cooperation. 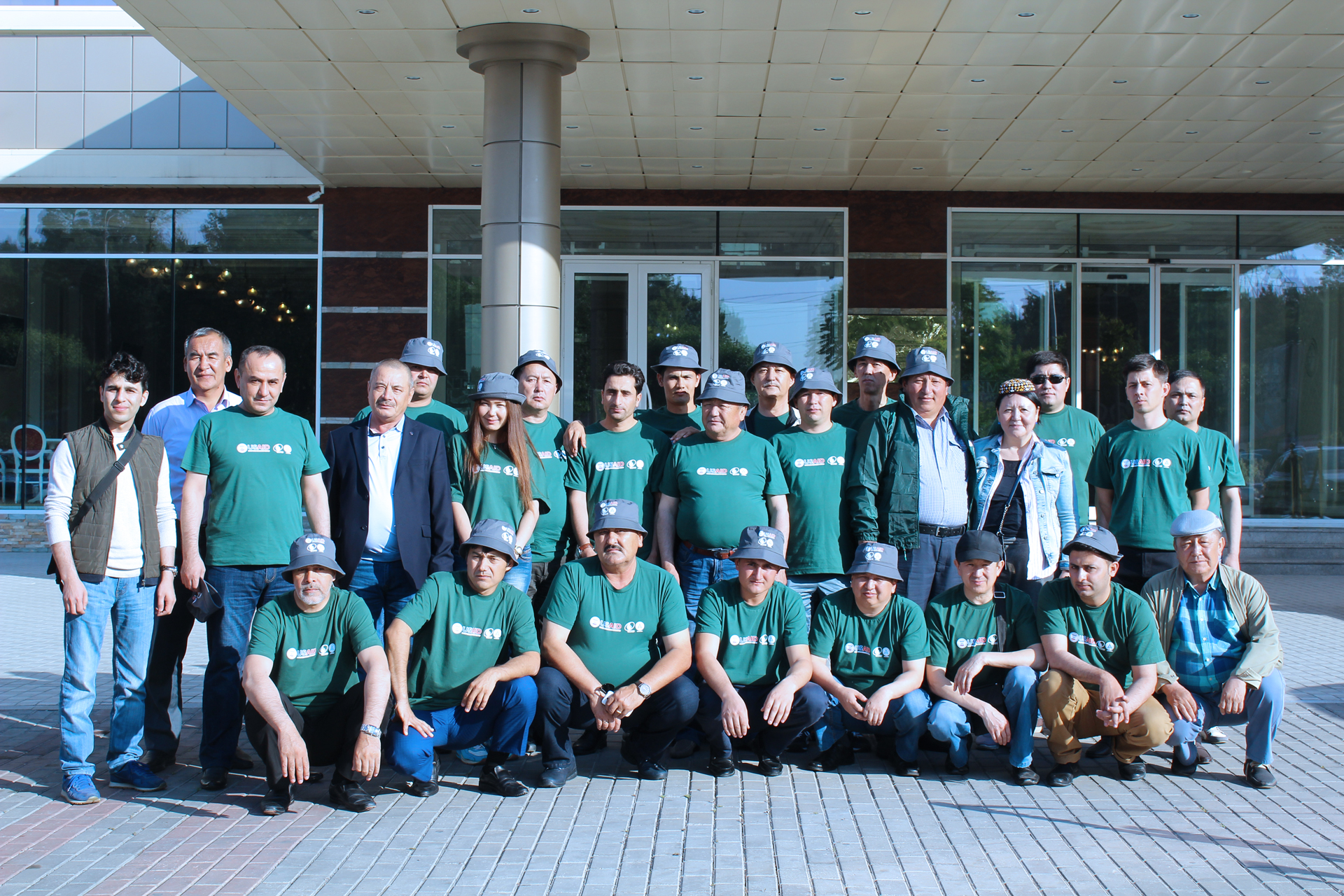 Smart Waters project is implemented by CAREC with the financial support of the United States Agency for International Development USAID during the period 2015-2020. The overall objective of the project is to enhance regional cooperation on shared water resources. Specifically, Smart Waters addresses the knowledge dis-lock in the region in the water sector, builds working relations among water managers and specialists, and demonstrates the potential of the basin management approach and cooperation with the academia.