On November 13-14, 2019 another UzWaterAware water-saving eco-marathon was held in Karshi city of the Kashkadarya region of Uzbekistan within the “One million trees” initiative in cooperation with Public Movement “Yuksalish”. As a part of this joint initiative, 300 trees were planted using the “hydrogel” technology, which will subsequently allow the efficient use of water resources during plant watering. A similar water-saving tree planting campaign with “Yuksalish” and the use of the hydrogel technology has already taken place on November 4-5 in Gulistan city of the Syrdarya region, and it is also scheduled for November 19-20 in Termez of Surkhandarya region of Uzbekistan.

The two-day event united the city improvement services employees, representatives of local authorities, teachers from universities and schools, students, NGOs, and the media around the idea of maintaining the ecological balance, as well as a productive and efficient approach to the natural resources.

Hydrogel technology specialist Mr. Alisher Turdimatov, Researcher at the Tashkent Scientific Research Institute of Chemical Technology, held a master-class about hydrogel, its features, and options for reducing water and fertilizer consumption in areas with an arid climate and limited water resources. 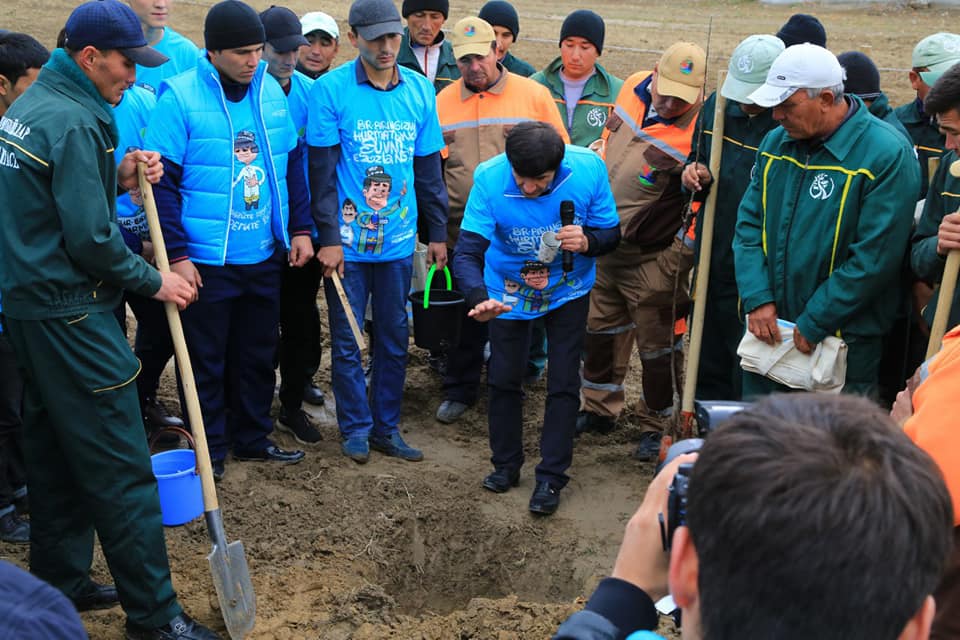 After this master-class, the specialists of local city improvement services, as well as students and others participated in planting 300 seedlings of Japanese sakura, Russian pine, and spruce using the hydrogel technology in the park zone and on the territory of the branch of the Tashkent Institute of Information Technologies. The next day, on November 14, an eco-lesson was organized for the teachers from 60 schools and farmers of Karshi and Kashkadarya region.

The same event took place on November 4 in Gulistan city of Syrdarya region, where specialists from the local city improvement services, as well as students from the Gulistan State University, participated in the planting of 300 seedlings of apple quince, pomegranate, and plum. On November 5, an interactive eco-lesson was held within the UzWaterAware project for Biology and Chemistry teachers of 16 local schools by the trainers of the Modern Journalism Development Centre. The main goal of the eco-lessons is to share knowledge on the water consumption and water conservation with school teachers in an interesting format so that later they can talk with children in a similarly fascinating way about the importance of efficient use of water resources. The teachers also received information booklets and hydrogel samples for demonstrating its properties to their students.

The first UzWaterAware eco-marathon was organized in Kokand (Fergana region) in March 2019. Several events on raising public awareness on efficient use of water resources were held there, including master-class on planting 2000 trees with hydrogel and eco-lesson for teachers. Eco-marathon in Nukus was in a training format with participation of young journalists and NGOs from the Republic of Karakalpakstan and Khorezm region, as well as the students of the Karakalpak State University of Berdakh.

UzWaterAware project is aimed at raising public awareness and is implemented by CAREC with financial support of the European Union. The national partner is the Ministry of Water Resources of Uzbekistan.