PRESS-RELEASE. Migration and remittances – as an opportunity for climate change adaptation in Tajikistan

PRESS- RELEASE. Migration and remittances – as an opportunity for climate change adaptation in Tajikistan

March 31, 2016 the National Stakeholder Workshop “CONNECTING POLICY MAKING TO SCIENCE: Opportunities for migration, remittances and climate resilience in Tajikistan” will take place in Dushanbe. The workshop will be held in the frameworks of the project “Migration, remittances, adaptation and resilience in arid and semi-arid regions of Senegal and Tajikistan”, which is one of the research packages of the multi-country research initiative “Pathways to Resilience in Semi-Arid Economies or PRISE” implemented by CAREC.

Climate change is one of the global concerns of humanity and sustainable development. Cost of no-action may lead to irreversible consequences and losses in many countries, especially in arid and semi-arid regions. Tajikistan is not an exception. Experts estimate that the country is the most vulnerable to climate impacts in comparison with other countries of Eurasia, and is characterized by complicated socio-economic conditions, high level of poverty and dependence on migration remittances. Mountainous terrain (93% of the territory of Tajikistan is covered by mountains) determines the risk of increased frequency of natural disasters due to climate change, and poses a threat to food and energy security.

Nowadays observations suggest that remittances are mostly used to support livelihoods and satisfy basic needs of households. The share of remittances is also used to generate revenues from economic activities, including entrepreneurship, farming, agriculture, etc. On the other hand, there are cases when remittances play a critical role in reconstruction of damaged households after natural disasters. In times of climate change, the frequency and intensity of natural disasters will increase, and require more allocation of migrant inflows to reconstruction activities. In order to avoid episodic peaks in short-term private investments, there is a need to introduce a number of policies and measures, which would provide an enabling environment for the migrant remittances to grow up and be accountable for a long-term climate-resilient development.

In this context, CAREC team in collaboration with national partners in Tajikistan and international experts of PRISE initiative is conducting a research to determine a role of migrants and the state of private investments through remittances, which contribute to a climate-resilient development at the household level in Sughd and Khatlon provinces, as well as within the Regions of Republican Subordination (RRS). The science-based approach of the project is considered important for the formulation of effective policy measures, especially in times of current exposure of the country to environmental and climate challenges.

The project innovation is to consider migration as an opportunity for climate change adaptation, and generate new knowledge on how economic development in arid and semi-arid countries can be more resilient to climate change.

Key objective of the National Stakeholder Workshop is to introduce the research project on migration, remittances, adaptation and resilience in arid and semi-arid regions of Senegal and Tajikistan to a broader range of the national and international stakeholders in Tajikistan, and ensure a tandem of science and policy making. 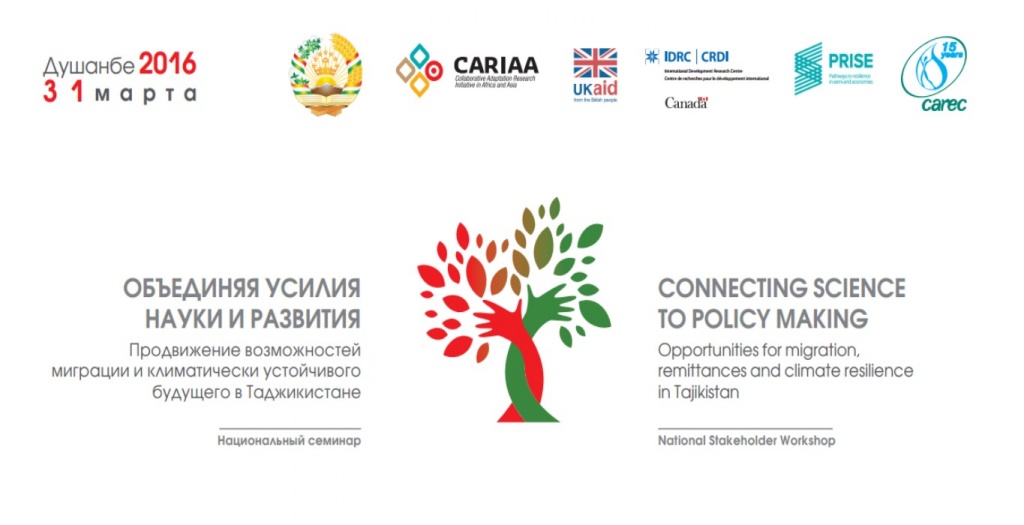