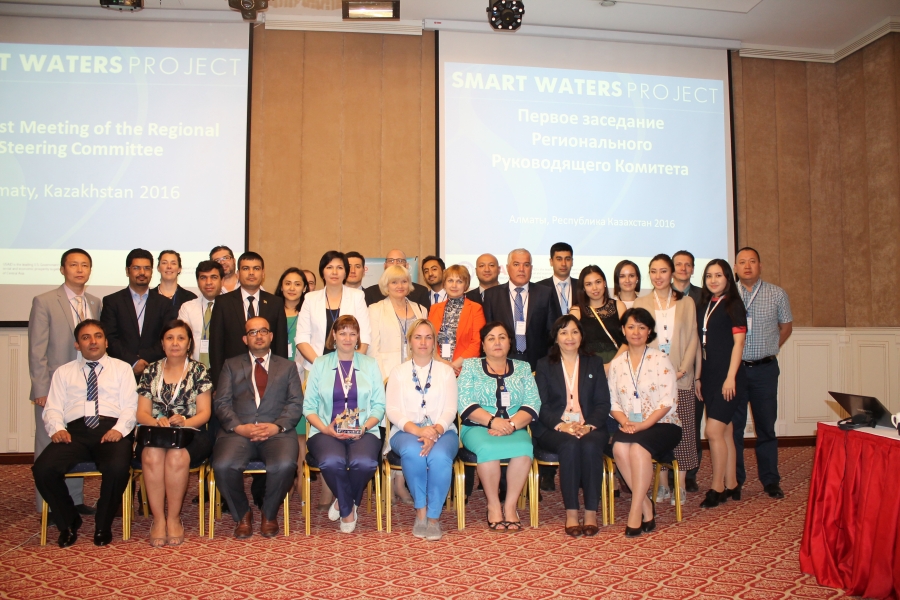 22 June 2016, Almaty – The First Meeting of the Regional Steering Committee on Smart Waters project implemented with the financial support from the United States Agency for International Development (USAID) was held in Ramada hotel.

All 6 participant-countries attended the meeting: 5 Central Asian countries and Afghanistan. The main issues on the agenda included discussions on members of the RSC and its work process (including the meetings of SC twice a year), the presentation of interim results of needs assessment in project countries and progress in the performance of its components, as well as the presentation of a Work Plan for the second half 2016.

The meeting of the RSC was held in a form of constructive dialogue: we received valuable comments from the key partners and discussed project issues essential for the further implementation, such as needs assessment, monitoring and evaluation of the project, the selection of candidates to do the master's program on IWRM at Kazakh-German University, the concept of the 7th Central-Asian Leadership Program on environment for sustainable development, a partnership of stakeholders and exchange of experience among the target countries of the project.

Afghan partners individually noted the timeliness of the project for Afghanistan, the successful registration and launch of the project in their country and the importance of regional cooperation on water issues in Central Asia.

Another fruitful discussion was held on selecting pilot rivers for project implementation, in particular, the official response was received from the Kyrgyz Republic - Mr. Tilek Issabekov, Deputy Director of the Department of Water Resources and Land Reclamation of the Ministry of Agriculture and Land Reclamation of the Kyrgyz Republic announced a formal decision about the selection of pilot rivers. "We received a letter from the CAREC with proposals from other countries for the selection of river basins as the project pilot territories and considered it in accordance with our priorities," - said Mr. Issabekov.

As a result of discussion, the following basins were chosen within the project framework:

2.     Ak-Suu and Isfana River Basins between Kyrgyzstan and Tajikistan (subject to the approval of the Republic of Tajikistan for unification  of the two Basins);

3.       Continuation of work in the Aspara River Basin between Kazakhstan and Kyrgyzstan;

4.       Continuation of work in the Isfara River Basin between Kyrgyzstan and Tajikistan.

Similarly the Kyrgyz side is considering the possibility of working in the Shohimardon and Padshaota River Basins proposed by Uzbekistan.

It also should be noted that currently there is no formal proposal for the selection of river basins from Turkmenistan, which is primarily related to the project registration procedures. As for Afghanistan, they just held the First national meeting in Kabul on June 5th 2016, which is only 2 weeks prior the Meeting of the RSC, so there was no final decision on the selection of the pilot river. The Afghani colleagues will discuss the selection of a national pilot basin and will timely inform CAREC.

In general, all the questions raised before the First meeting of the RSC have been resolved and after completing the Work Plan based on comments from the countries, it will be possible to start the work on selected river basins and other project areas.