High-level partnership: an international conference on the security of Central Asia was held in Samarkand

November 10-11, 2017, CAREC participated in the international conference «Central Asia: One Past and a Common Future, Cooperation for Sustainable Development and Mutual Prosperity», held in Samarkand under the auspices of the UN. Participants supported the proposal on drafting a mutually agreed UN General Assembly Resolution by the Central Asian states on enhancing regional and international cooperation to ensure security, peace and sustainable development in the Central Asian region.

The event gathered not less than 500 participants, including foreign ministers of Central Asian countries, high-level official delegations from the CIS countries, Europe, Asia and the USA, heads of international organizations, including the UN, EU, OSCE, and SCO along with foreign media.

The President of the Republic of Uzbekistan Shavkat Mirziyoyev delivered a speech:

"The future of the region is formed by every single state in Central Asia. The willingness and desire for cooperation, as well as the responsibility of all the Central Asian countries for own future serve as the solid foundation and guarantor of the sustainable development," he stated. “It is on the basis of principles of good-neighborliness and mutually beneficial partnership that our states will be able to realize their potential more effectively in the trade-economic, transport-communication, cultural-humanitarian spheres, in matters of security and stability. To do this, we need to jointly eliminate the conditions that fuel and provoke the conflict potential, ensure the matching of national development prospects with the region-wide priorities.”

The President paid a special attention to a settlement of the problems of equitable water use in the region.

"I am convinced that in resolving these issues it is necessary to rely on international legal norms that take into account the interests of all the states of the region," Shavkat Mirziyoyev emphasized. “Uzbekistan will support the draft Convention on the use of water resources in the Amudarya and Syrdarya rivers basins, developed by the UN. Solving the problems of the Aral catastrophe also requires concerted efforts. This is not only a common pain, but also a common task - without consolidation, we will be unable to come up with an adequate response to the challenges. It is necessary to intensify the activities of all the states of the region and engage donors in the implementation of programs."

Shavkat Mirziyoyev noted that Uzbekistan is a supporter of the soonest resolution of existing disagreements and the strengthening of mutual trust:

"Realizing our common development priorities, today we are looking for reasonable compromises on such acute issues of the regional agenda as borders, water use, transport and trade," the Uzbek president emphasized. “Lately, Uzbekistan and Kyrgyzstan have agreed 85 percent of their borders. Cooperation in the sphere of transport has expanded. Air traffic with Tajikistan was renewed. The volume of trade is growing, ties between border territories are being strengthened and cultural and humanitarian exchanges have intensified. On the margins of today's conference, Uzbekistan, Kazakhstan and Turkmenistan signed an agrt on borders junction point. This agreement is not subject to denunciation, will further strengthen the bonds of friendship between the three neighboring states."

Mirziyoyev also highlighted the fact that today the prospects for stable and sustainable development in Central Asia are inseparably linked with the achievement of peace in neighboring Afghanistan. According to the statement, Uzbekistan will continue to actively participate in the economic reconstruction of the neighboring country, the development of its transport and energy infrastructure, the training of national personnel. One of the priorities Mirziyoyev called comprehensive assistance to Afghanistan's integration into regional economic processes.

-
Within the program of the two-day conference, concrete measures for strengthening cooperation between the countries of Central Asia in the political, trade-economic, water-energy, environmental and cultural-humanitarian spheres were discussed, as well as the role of international organizations in implementing development projects and increasing the capacity of the countries of the region in counteracting modern challenges. 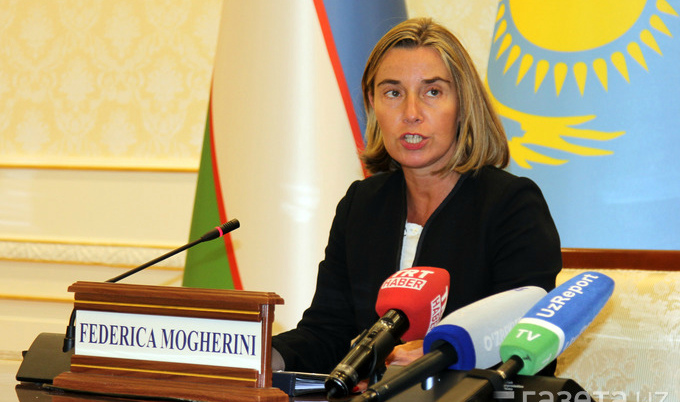 "I see more opportunities in this region than challenges and threats. This is an opportunity for economic growth, security, joint development of Central Asia,” said the EU High Representative for Foreign Affairs and Security Policy, Federica Mogherini. "The parties need to help each other in the search for collective responses to global challenges: climate change, environmental protection, water management," she noted. “The EU is ready not only to share its experience and knowledge, but also to support the region and every country in the chosen way of cooperation by all means that we have"

The UN Secretary General for Political Affairs - Miroslav Jenča, Director of the Regional Bureau for Europe and CIS of the United Nations Development Programme - Cihan Sultanoğlu, the OSCE Secretary General - Thomas Greminger, Chairman of the Executive Committee - CIS Executive Secretary - Sergey Lebedev, Secretary General of the SCO - Rashid Alimov and the leaders of other international structures also delivered their speeches.

-
On behalf of CAREC, executive director Iskandar Abdullaev addressed the speech. In his presentation, he highlighted the issues of environmental protection and transboundary water management, stressing that the development of Central Asian countries is indivisible from regional cooperation in these areas. The region is represented by a single ecosystem and shared water resources that are sensitive to climate change and anthropogenic impact.

Abdullaev stressed that there can be a serious competition for water resources without systematic cooperation in the region, and as decisions in this direction he voiced the implementation of basin agreements, transition from dividing water volumes to sharing the benefits of water and water infrastructure. It is noted that a dialogue platform on water diplomacy for parliamentarians and representatives of MFAs has already been established and operated since 2015.

CAREC also works on small rivers, supports the work of regional working groups and promotes a comprehensive exchange of experience and knowledge in the discussion of transboundary environmental issues. As an example, the Central Asian International Environmental Forum was mentioned along the "Environment for Central Asia" process, which is designed to consolidate the efforts of various players in the field of sustainable development.

IT IS IMPORTANT TO KNOW

- It is expected that the population in Central Asia will grow to 90 million in 2050.

- There is one of the highest indicators of water consumption per capita in Central Asia.

- According to the study of adelphi and CAREC, conducted with the support of SDC, in case of the limited water cooperation in the region the economic losses of the region are up to 4.5 billion US dollars.

The conference in Samarkand became one of the practical measures to implement the initiatives announced by Shavkat Mirziyoyev from the rostrum of the 72nd session of the UN General Assembly aimed at ensuring socio-economic prosperity and strengthening cooperation in the region. The conference was organized by the MFA of Uzbekistan, the UN Regional Center for Preventive Diplomacy in Central Asia and the Regional Office in Central Asia of the UN Office on Drugs and Crime.