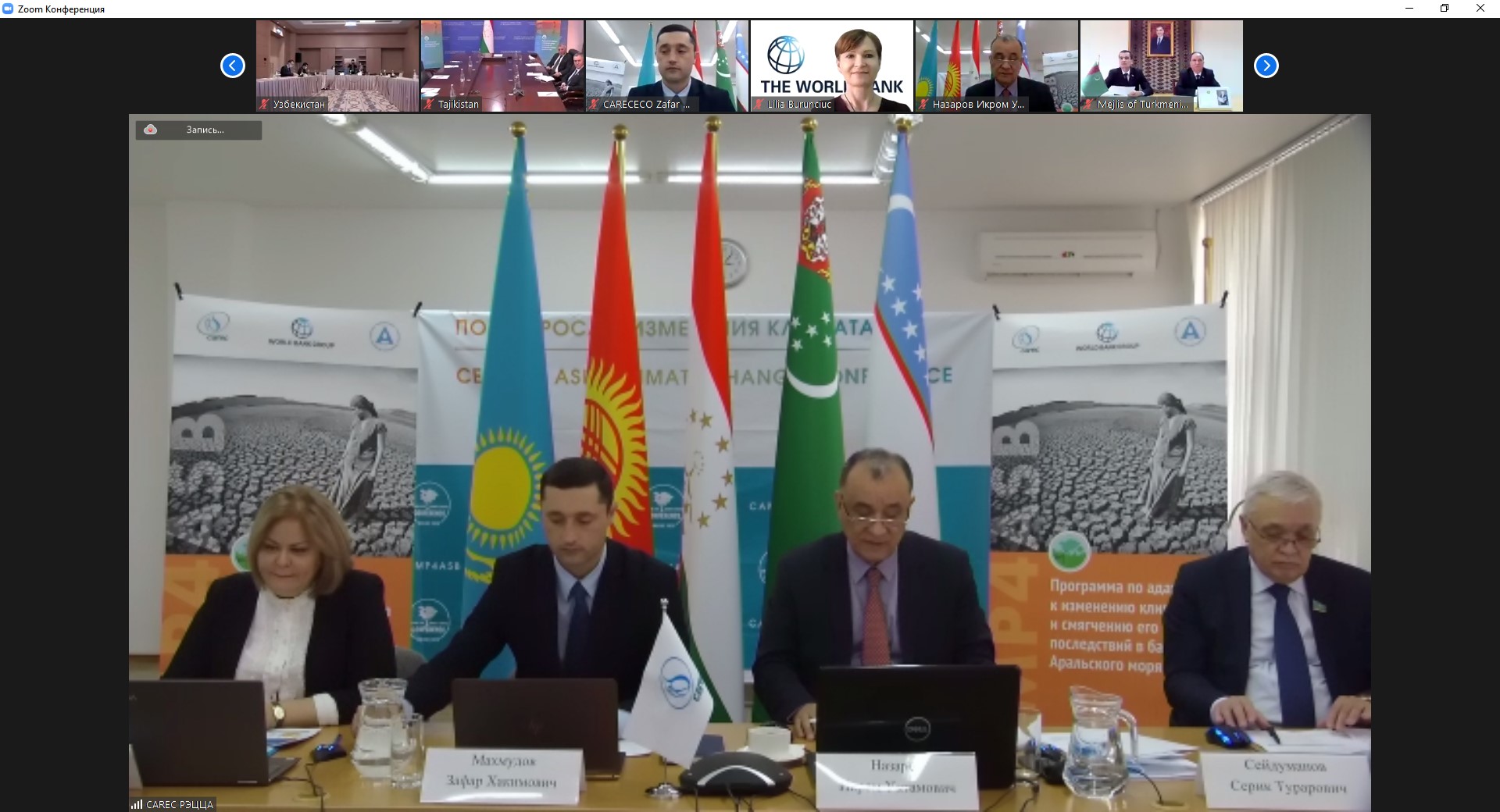 On October 29, 2020, the second climate meeting of the Ministries of Foreign Affairs representatives and parliamentarians of the Central Asian countries was held online. This important event was organized by CAREC within the framework of the Regional project “Climate Adaptation and Mitigation Program for Aral Sea Basin” (CAMP4ASB) financed by the World Bank.

A discussion between representatives of the Ministries of Foreign Affairs representatives and parliamentarians of the Central Asian countries on the issues related to environmental management in the region was initiated by the Regional Environmental Centre for Central Asia (CAREC) in 2016 with the support of the European Union. Since 2019, climate change issues have become key points on the agenda of the dialogue platform.

The climate meeting of the Ministries of Foreign Affairs representatives and parliamentarians of the Central Asian countries was opened with welcoming speeches by representatives of the World Bank, the International Fund for Saving the Aral Sea and the Regional Environmental Centre for Central Asia.

“Unfortunately, Central Asia remains one of the most vulnerable regions in the world: more and more emergencies occur: glaciers are moving away, the intensity of such phenomena as floods and droughts is increasing. These disasters will have a multiplier effect on land degradation, destruction of infrastructure and livelihood loss. Floods alone annually bring damage of 4 billion US dollars to the Central Asian countries, and this figure will only grow if serious measures are not taken. Our future depends on whether we sit back or take action together. "

Mr. Sulton Rakhimzoda, Chairman of the Executive Committee of the International Fund for Saving the Aral Sea, noted that urgent measures must be taken to adapt to climate change in the region, efficiently manage water resources and attract investments for relevant activities. Mr. Rakhimzoda said that parliamentarians could take climate change into account in their legislative enactments, and foreign ministries saw this issue as a basis for consolidating the region. He also drew the meeting's participants' attention to the achievements of the project "Climate Adaptation and Mitigation for Aral Sea Basin" (CAMP4ASB), which includes an infrastructure investment component, and called on donors to support infrastructure investments within the framework of climate finance.

Mr. Zafar Makhmudov, Executive Director of CAREC, noted that climate change impacted agriculture, water management, energy and led to annual losses at the level of several percent of GDP. Mr. Makhmudov briefly dwelt on the thematic areas of CACCC 2020 (climate policy, science and research, information and knowledge, climate finance) and the main results of the conference. He also noted an increased interest in climate change adaptation, an active exchange of information and knowledge, and informed about CAREC's support for national delegations' potential to participate in UN climate negotiations.

A plenary session, "Regional initiatives for cooperation in climate change in Central Asia", was held within the event. The speakers of this session were:

Ambassador Peter Burian, Special Representative of the European Union for Central Asia, highlighted the current priority of getting out of the global pandemic through reducing emissions and switching to clean energy. Mr. Burian also emphasized the European Union's long-term priorities, including the long-term goal of achieving EU carbon neutrality by 2050. He announced that the European Union remains the primary source of public climate investments. In particular, in 2018, 21.7 billion euros were allocated for climate issues, of which 10.3 billion euros was allocated for adaptation to climate change. Mr. Burian said that the European Union had reaffirmed its intentions, together with other developed countries, to allocate up to USD 100 billion annually to support activities to reduce greenhouse gas emissions and adapt to climate change in developing countries.

Ambassador Hinrich Thölken, Commissioner for Climate, Energy and Digitalization at the German Foreign Ministry, noted Germany's commitment to green development and a green recovery from the global pandemic's effects. Mr. Tölken presented a new initiative of the German Government "Green Central Asia" with such thematic priorities as climate adaptation, effective water resources management, and regional cooperation development. He called on the countries of the region to participate more actively in the Green Central Asia initiative.

Ambassador Guy Bonvin, Special Envoy for Water of the Swiss Agency for Development and Cooperation (SDC), presented "Blue Peace Regional Initiative: Progress and Future Plans" and noted that climate change is a huge challenge for the whole world ... Mr. Bonvin focused on monitoring the water cycle, including observing snow cover, glaciers, and permafrost areas. He also noted that CHF 11 billion's budget is planned for the Blue Peace 2021-2024 initiative to support activities in various countries of the world, and relevant proposals are currently being considered in Parliament.

Ms. Irina Bekmirzaeva, Coordinator of the Regional Coordinating Group of the Project "Climate Adaptation and Mitigation Program for Aral Sea Basin" (CAMP4ASB), touched upon increasing access to climate knowledge and data for key stakeholders in Central Asia. In her speech, Ms. Bekmirzaeva noted the CAMP4ASB project is an example of a regional project that includes both a "soft" component to support regional dialogue, improve access to information, increase capacity, and a "hard" component, which finances climate projects based on the introduction of new technologies in Tajikistan and Uzbekistan. She briefly presented the main results and achievements in the "soft" component of the project implemented by the Regional Environmental Centre for Central Asia. 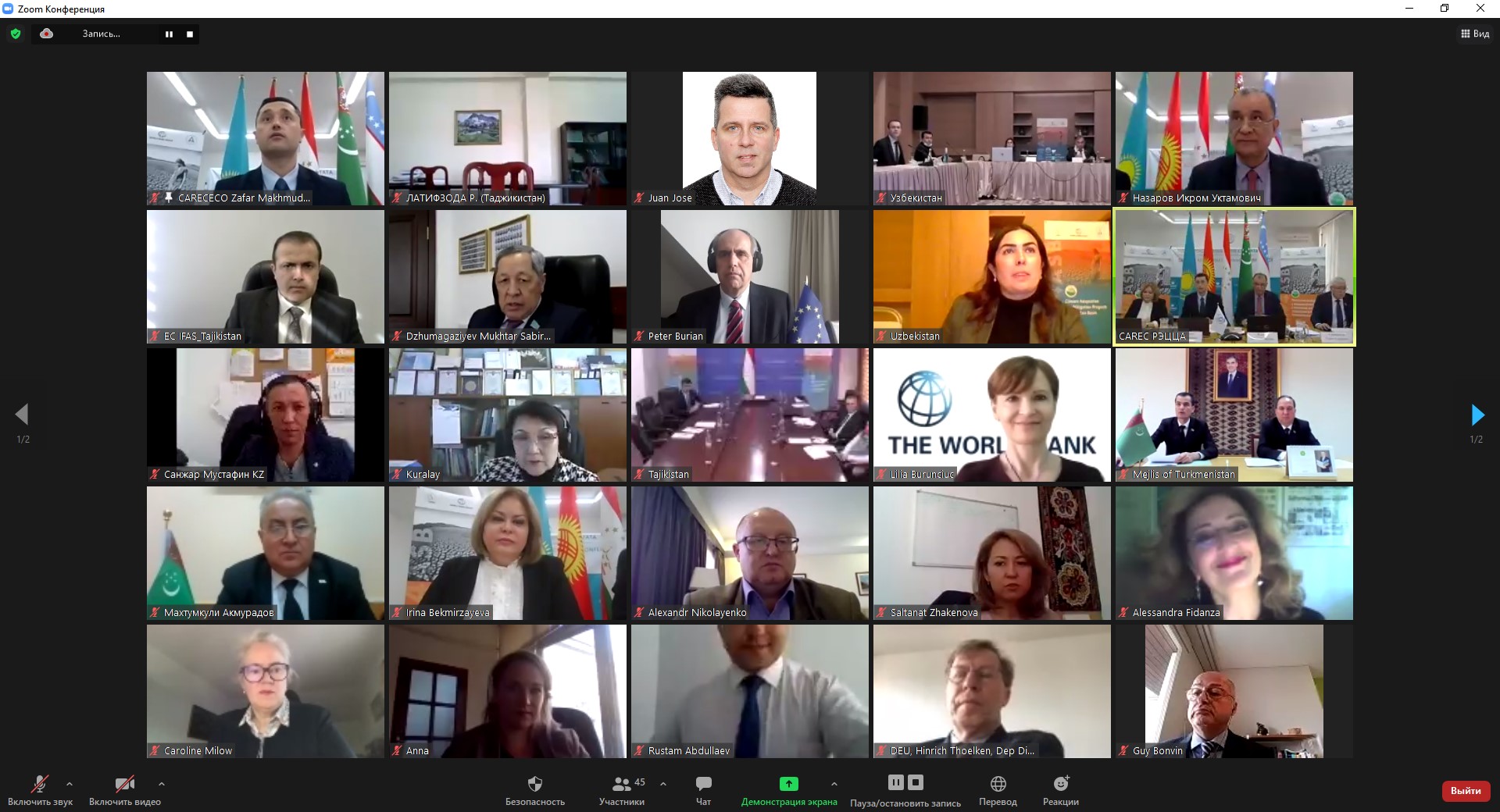 The second plenary session of this event was devoted to developing programs and improving national legislation in the field of climate change in Afghanistan and Central Asian countries. The representatives of the parliaments of Kazakhstan, Tajikistan, Turkmenistan and Uzbekistan were speakers at that session.

Mr. Seidumanov Serik Turarovich, Deputy, Member of the Committee on Ecology and Nature Management of the Mazhilis of the Parliament of the Republic of Kazakhstan, informed about Kazakhstan's plans for "green growth" and decarbonization of the national economy to fulfill the national contribution under the Paris Agreement - to reduce emissions by 15% by 1990. He also announced the Emissions Trading System's restart, which refers to a market mechanism for reducing greenhouse gas emissions. Within the framework of the new Environmental Code, work is underway to improve state regulation of greenhouse gases. Mr. Seidumanov also noted that specific steps and long-term scenarios for the development of decarbonization of the economy by 2050 would be reflected in the Concept of low-carbon development, which is currently being developed.

Mr. Valizoda Abdukodir Isuf, Member of the Committee of the Majlisi Milli of the Majlisi Oli of the Republic of Tajikistan on Agriculture, Employment and Environment, informed that the country is working on the development of policies and legislation to reduce the negative impacts of climate change. In particular, he referenced the National Strategy for Adaptation to Climate Change of the Republic of Tajikistan for the period up to 2030, approved by the Decree of the Government of the Republic of Tajikistan dated October 2, 2019 No. 482. Mr. Valizoda noted the priority in terms of climate adaptation in agriculture, where the main working-age population is employed, and gave examples of ongoing projects on drip irrigation, provision of seeds for crops that are resistant to climate change.

Mr. Alikhanov Boriy Batirovich, Chairman of the Committee for Development of the Aral Sea Region of the Senate of the Oliy Majlis of the Republic of Uzbekistan, informed about the significant efforts that the country is making to mitigate the consequences of the Aral Sea disaster and develop the Aral Sea region. Mr. Alikhanov noted that over 250 projects that have been implemented aimed at climate adaptation and mitigation of the consequences of the Aral Sea crisis. In his speech, he referenced as an illustrative example that on the dry bottom of the Aral Sea only for the period from December 2018 to March 2020 sowed with seeds and planted with saxaul bushes about 1300 thousand hectares. He also noted the creation of a Multi-Partner Trust Fund for Human Security for the Aral Sea region under the UN's auspices.

The parliamentarians' speeches were followed by a discussion on ensuring the sustainability of the dialogue platform to exchange knowledge, best practices and experiences in climate diplomacy and legislation. It touched upon issues related to the role of CAREC in the development of regional cooperation, including increasing the capacity of national delegations to participate in UN climate negotiations, initiatives to create a unique program for the Aral Sea, and the development of environmental codes by Central Asian countries.

During the meeting, a ceremony of signing a memorandum of understanding between the GIZ Program "Green Central Asia: Transboundary Dialogue on Climate, Environment and Security in Central Asia and Afghanistan" and CAREC took place.

Climate  Adaptation and Mitigation Program for Aral Sea Basin or CAMP4ASB is implemented by CAREC and financed by the World Bank. Project aims to enhance regionally coordinated access to improved climate change knowledge services for key stakeholders (e.g., policy makers, communities, and civil society) in participating Central Asian countries as well as to increased investments and capacity building that, combined, will address climate challenges common to these countries.CAMP4ASB is implemented in Kazakhstan, Tajikistan, Turkmenistan and Uzbekistan during the period from 2016 to 2021.