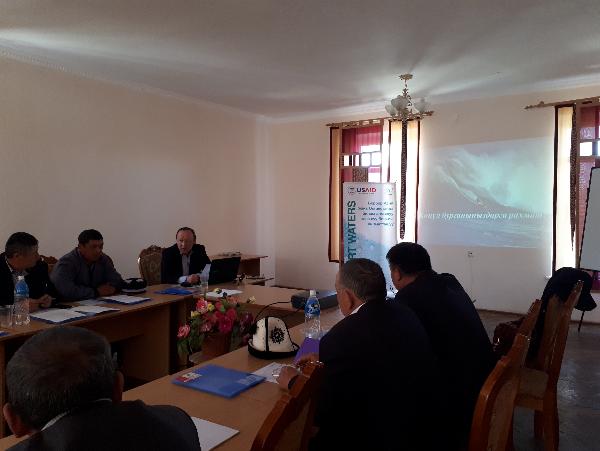 On April 4, the first introductory training on basin planning on the Isfana and Aksuu Rivers was held in Isfana town, Kyrgyzstan. The Isfana and Aksuu are transboundary rivers located on the territory of Kyrgyzstan and Tajikistan; both play a significant role in the livelihood of the local population.

In December, last year, Small Basin Council (SBC) was established in the Leilek District of Kyrgyzstan. The decision to create the council was a result of the cooperation of representatives of CAREC-USAID joint project "Water, education and cooperation" with the Department of Water Resources under the Ministry of Agriculture and Melioration of the Kyrgyz Republic. Members of the SBC are representatives of the district and village administrations, district water management department, WUAs, forestry, Sarkent Nature Park, educational institutions, NGOs and local deputies.

The training was conducted according to the training material of CAREC "Training module. Five Steps to Basin Planning ", developed in 2014. This was the first step in the implementation of basin planning in the basins of the Isfana and Aksuu. SBC members, CAREC experts and project team studied and discussed following topics:

It should be noted that earlier, from September to December 2017, Smart Waters project conducted a study in the river basins of the Isfana and Aksuu. This study included socioeconomic, hydrological and environmental conditions, as well as the state of water use and hydrotechnical constructions. Later projects’ expert group prepared the situational analysis of the pilot basins, they also generated the results of the work and delivered recommendations.

Based on the results of the training, SBC members and CAREC-USAID project team developed a preliminary list of problems in basins. In addition, during the discussion, they identified the ones that require special attention: the absence of head water intake facilities and necessary equipment for adjustment work; and the need of landfill.

The first step on the way to the basin plan on the Isfana and Aksuu rivers is done! The next training on basin planning will be conducted according to CAREC's annual plan during the next half-year.