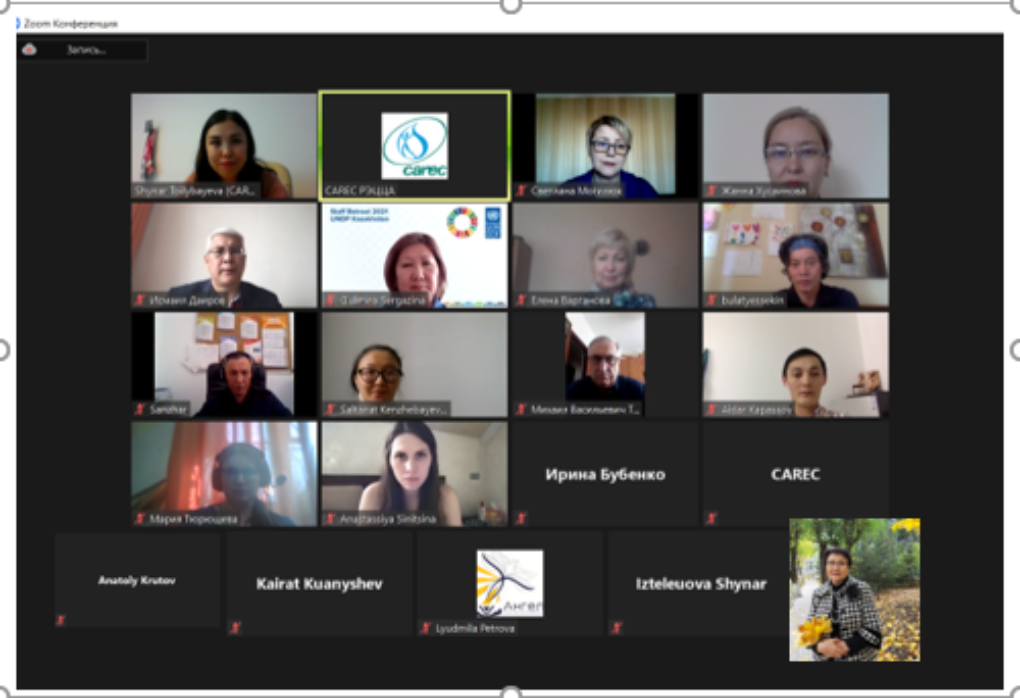 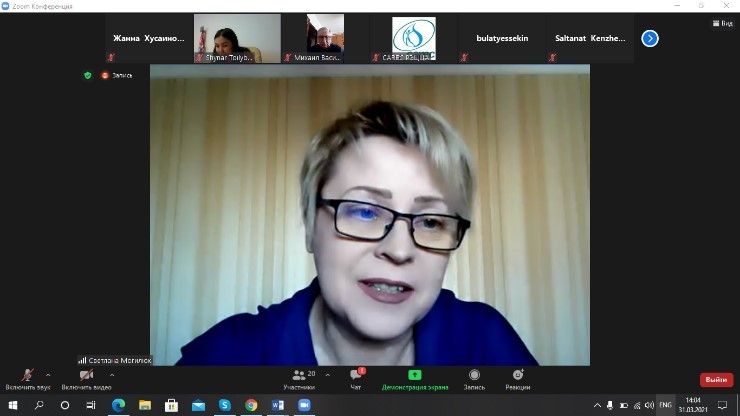 The event was opened by a member of the CAREC Board of Governors from NGOs, the chairman of the Association Civil Alliance of Pavlodar region, the chairman of the EcoForum, Svetlana Mogilyuk, who greeted all participants and emphasized the important role of CAREC in summarizing the practices that are promoted at the level of local communities. Svetlana Mogilyuk outlined a range of issues that should be addressed. Among them - the challenge of incineration of household waste, which increases greenhouse gas emissions; the challenge of fuel poverty - the use of low-quality fuel, the incineration of plastic waste. Mrs.Mogilyuk drew the attention of the participants to the need to promote climate issues in environmental education. She also emphasized that today the EcoForum of Kazakhstan is the Association of the EcoForum of Kazakhstan, and is an officially registered legal entity 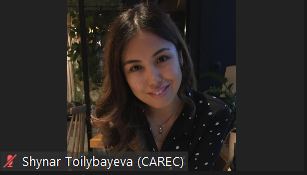 Director of the CAREC Country Office in the Republic of Kazakhstan, Shynar Toilybayeva presented the main results of the CAMP4ASB project, namely the project is one of the largest projects of CAREC related to improving access to information and knowledge on climate change, the purpose of which is solving common challenges associated with the consequences of climate change in the countries of Central Asia (such as: drought, floods, floods). “One of the main Outcomes of the project is the creation of the Central Asian Climate Information Platform. Which was developed at the request of the countries of the CA region. It is a platform that collects and structures relevant data and knowledge on climate change in Central Asia. Information is collected in a cross-sectoral context of water-related issues; agriculture; natural disasters caused by climate change). The platform consists of 3 main interactive SERVICES: knowledge repository, geoportal and e-learning"- said Ms. Toilybayeva Sh. 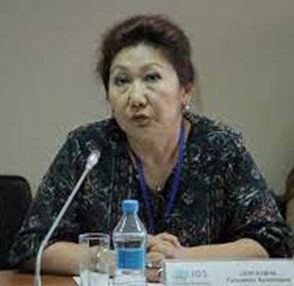 Gulmira Sergazina, Climate Change Project Portfolio Manager of the UNDP in Kazakhstan, presented results of the Country Office of the UNDP in Kazakhstan to strengthen the potential of the Kazakh delegation in the climate negotiations and increase the capacity for the Civil Societies through training seminars, courses and conferences that are carried out every year. In the thematic portfolio of projects on climate change, two large projects are currently being implemented - "Development of the Eighth National Communication of the Republic of Kazakhstan under the UNFCCC and preparation of two (fourth and fifth) biennial reports". The uniqueness of the project includes the systematization of all information on climate change that is available in Kazakhstan. Namely: the amount of greenhouse gas (GHG) emissions in the Republic of Kazakhstan; forecasts of GHG emissions by sectors of the economy from the construction and operation of facilities (power plants, roads, industrial facilities, etc.); the impact of a changing climate on health, agriculture, water resources, yields; current policies affecting GHG emissions and adaptation to climate change. 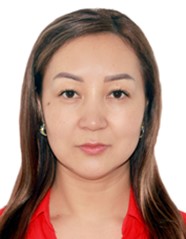 Ainur Kopbaeva, Deputy Director of the Climate Policy and Green Technologies Department of the Ministry of Ecology, Geology and Natural Resources, presented the policy and position of the negotiation process on climate change in Kazakhstan. Kazakhstan is a party to the Paris Agreement and actively participates in the implementation of green economy policies. As a Party to the Paris Agreement, Kazakhstan has committed itself to reducing greenhouse gas emissions by 15% from 1990 levels by 2030. At the moment, the Chapter on adaptation to climate change in the Environmental Code has been developed and adopted (on state regulation of issues of adaptation to climate change). It provides for the introduction of an adaptation process, which is aimed at reducing vulnerability in the context of the country's regions, as well as in the sectors most vulnerable to climate change. Also, a Chapter on GHG Emissions Reduction has been developed, the chapter regulates the Emissions Trading System (ETS). 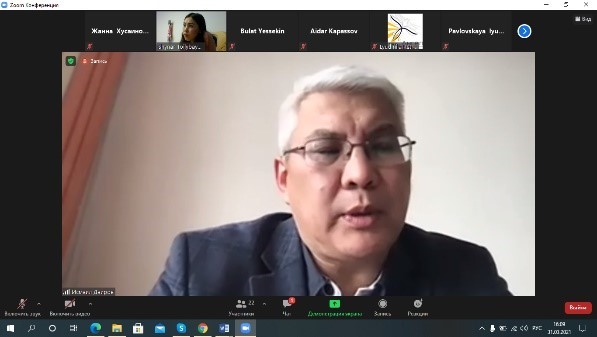 CAREC Consultant Ismail Dairov in his speech “Facilitating policy dialogue and capacity building for Central Asian countries to the 26th COP of the UNFCCC” named main documents that will form the basis of the regional project of the countries of Central Asia at the 26th Conference of the Parties to the UNFCCC. “The cleared text of the regional declaration will serve as the basis for an appeal for donors' support at the meetings in Bonn, Rome, and COP-26 in Glasgow,” said Ismail Dairov. He believes, Central Asia is the most vulnerable region in the world and it is important to demonstrate the problems of the region at the international level. This is one of the tasks of the regional declaration. If the regional statement allows reaching the political consensus then the problems of the region, including financing, climate adaptation, new technologies implementation, can be tackled systematically within the framework of negotiating groups and at the next COPs of the UNFCCC.

CAREC consultant Bulat Yessekin informed the participants about the work done within the framework of the CAMP4ASB project. He reported about the collection and dissemination of over 120 technologies for climate change adaptation. We selected simple, proven, available technologies in such areas as access to water, access to energy, food production. For example, dirty water treatment technology is simple and inexpensive, no more than $ 50 worth. Bulat Yessekin highlighted the importance of designing local action plans to mitigate climate change for farmers. “Over 30 million population in Central Asia is potential and interested users of these initiatives,” said Bulat Yessekin. He expressed gratitude to CAREC, the organization included this important component of climate resilient technologies into its CAMP4ASB project. According to the discussion’s results, it is planned to organize regional meetings, thereby giving impetus to the national processes of public participation in the lawmaking and the implementation of programs and strategies in climate change.

Since its inception and formation, CAREC, within the framework of its mission, since 2001, has been cooperating with environmental public organizations in the Central Asian region. In order to support the implementation of the Aarhus Convention, CAREC works on the first two pillars of the convention - ensuring access to information and ensuring public participation in environmental decision-making.

Currently, within the framework of the Climate Change Adaptation and Mitigation Program in the Aral Sea Basin (CAMP4ASB), funded by the World Bank, the regional component of which is being implemented by CAREC, support is being provided to networking in the civil sector. In 2019, the foundation was laid for the exchange of knowledge, experience, and the strengthening of regional and national activities of non-governmental organizations and civil society networks working on climate change. During the CACCC-2019, a Memorandum was signed on the creation of a Regional Network of Civil Society Organizations on Climate Change (RNCSOs), with the support of the CAMP4ASB project of the World Bank. The network included the EcoForum of Kazakhstani CSOs, the Climate Network of Kyrgyzstan, the Climate Network of Tajikistan, the Nature Conservation Society of Turkmenistan and the Ecological Movement of Uzbekistan.